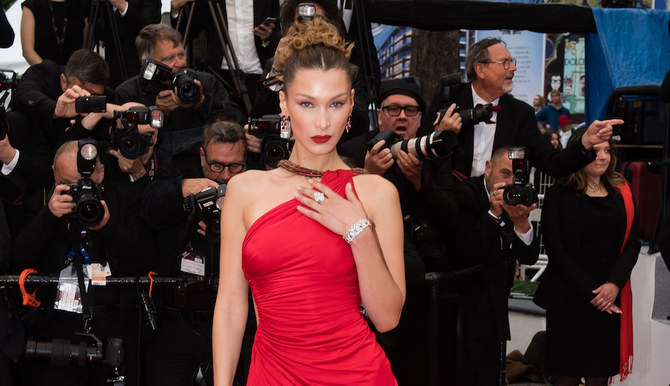 DUBAI: Bella Hadid appeared on an episode of “Life in Looks” on the Vogue YouTube channel back in August, during which she reflected on her fashion choices from 2015 until now.

While talking about her Cannes 2021 look toward the end of the video, the part-Palestinian model said: “I never, growing up, had anything designer. My mom wouldn’t let me. I think I got my first pair of Louboutins when I graduated high school.”

She added: “I love to see that progression, I feel blessed that I made it out alive of that mental state that I was in for so many years.”

The clip was re-shared on TikTok months later and it recently went viral, with users sarcastically taking digs at Hadid’s lack of designer clothing being “so relatable” and calling her story “detached from reality.”

One TikTok user said: “These celebrities really need to touch base with reality. They’re so out of it. It’s frightening how they think they really struggled.”

The 25-year-old catwalker took to the comments section of one such TikTok video, writing: “The context of this was that a lot of people think I grew up buying and wearing designer things.

“I wore this same pair of shoes that were given to me as a gift for the first three years of my career to every job, every go-see or meeting. The metal is all that’s left at the bottom of the heel,” she added as an explanation.

In the end, she agreed that it was a “bad story to tell” and that she “can’t listen to myself talk either.”

This was not the first time Hadid had shared the story. In a 2017 interview with Elle, the model described her skill for shopping “on a budget.”

“I know all the secrets for how to shop for good stuff on a budget because I didn’t buy anything designer until I turned 18,” she said. “When I was 18, I finally let myself buy a designer piece. I bought a pair of Louboutins because that’s what you do when you’re 18.”