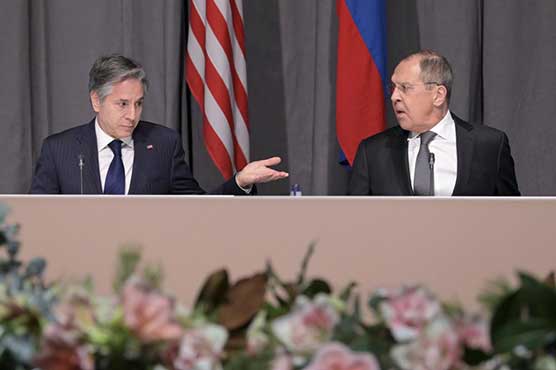 STOCKHOLM (Reuters) – US Secretary of State Antony Blinken met his Russian counterpart on Thursday to warn him face-to-face of the “serious consequences” Russia would suffer if it invaded Ukraine and to urge him to seek a diplomatic exit from the crisis.

Blinken delivered the warning to Russian Foreign Minister Sergei Lavrov at a meeting in Stockholm, a day after declaring that Washington was ready to respond resolutely, including with hard-hitting sanctions, in the event of a Russian attack.

“The best way to avert the crisis is through diplomacy, and that s what I look forward to discussing with Sergei,” Blinken told reporters before going into talks with Lavrov.

He said Russia and Ukraine should each fully implement their obligations under the 2014 Minsk peace process, which was designed to end a war between pro-Russian separatists and Ukrainian government forces in the east of the former Soviet republic.

Washington was willing to facilitate this, Blinken said, but “if Russia decides to pursue confrontation, there will be serious consequences”.

Lavrov told reporters Moscow was ready for dialogue with Kyiv. “We, as President (Vladimir) Putin has stated, do not want any conflicts,” he said.

Ukraine has become the main flashpoint between Russia and the West as relations have soured to their worst level in the three decades since the Cold War ended. Kyiv says Russia has amassed more than 90,000 troops near their long shared border.

Moscow accuses Kyiv of pursuing its own military build-up. It has dismissed as inflammatory suggestions it is preparing for an attack on Ukraine and has defended its right to deploy troops on its own territory as it sees fit.

But Putin has also said Russia would be forced to act if NATO placed missiles in Ukraine that could strike Moscow within minutes.

The Kremlin said on Thursday that the probability of a new conflict in eastern Ukraine remained high and that Moscow was concerned by “aggressive” rhetoric from Kyiv and an increase in what it called provocative actions along the line of contact between government forces and the pro-Russian separatists.

Kremlin spokesman Dmitry Peskov told reporters on a conference call that Moscow was worried about the possibility of a Ukrainian military move in eastern Ukraine, something that Kyiv has repeatedly denied planning. He spoke before Blinken s meeting with Lavrov.

Russia also said on Thursday it had arrested three suspected Ukrainian intelligence agents, including one accused of planning to carry out an attack using two homemade bombs, allegations that Kyiv dismissed as trumped up.

In a speech to the Organisation for Security and Cooperation in Europe earlier on Thursday, Lavrov said military tensions were rising on the continent and he hoped that Russia s proposals on a new European security pact would be carefully considered.

“The architecture of strategic stability is rapidly being destroyed, NATO refuses to constructively examine our proposals to de-escalate tensions and avoid dangerous incidents,” Lavrov said. “On the contrary, the alliance s military infrastructure is drawing closer to Russia s borders. The nightmare scenario of military confrontation is returning.”