Bodies of 25 migrants recovered off Yemen after boat capsized 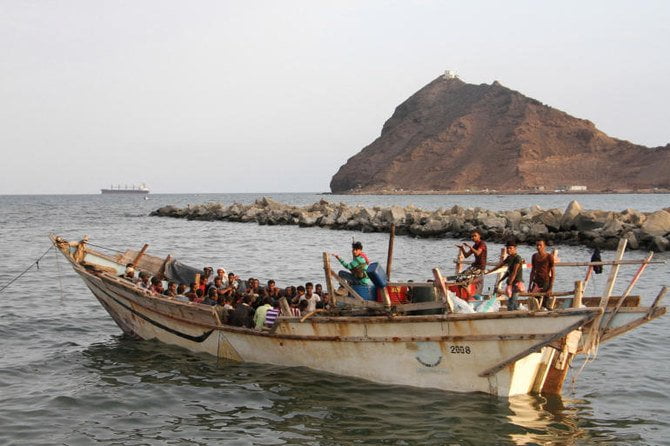 HODEIDAH, Yemen: The bodies of 25 migrants were recovered off Yemen on Monday after the boat that was carrying them capsized with up to 200 people on board, a provincial official told AFP.

Fishermen who found the bodies told AFP that they were floating in the waters of Ras Al-Ara in the southern province of Lahij, an area so rife with human trafficking that local people call it the “Gate of Hell.”

“The boat overturned two days ago and was carrying between 160 and 200 people,” said Jalil Ahmed Ali from the Lahij provincial authority, citing information given by Yemeni smugglers. The fate of the other people on board was unclear.

The UN’s International Organization for Migration confirmed to AFP that a boat sank in the area but said it was still trying to establish the details of the incident.

The fishermen said the victims, found in the Bab Al-Mandab strait that separates Djibouti from Yemen, appeared to be of African origin.

“We found 25 bodies of Africans who drowned when a boat carrying dozens of them sank off the Yemeni shores,” said one of the fishermen.

“We saw the bodies floating in the water 10 miles from the shores of Ras Al-Ara,” added another.

Migrants often find themselves stranded in Yemen with the beaches of Ras Al-Ara being among the areas most targeted by smugglers.

In recent months, dozens of migrants have died in the Bab Al-Mandab strait, a major route for international trade but also for human trafficking.

In April, at least 42 migrants died off Djibouti after the capsize of their boat which had left from Yemen, according to an IOM report. They were likely among those who try to return home after finding themselves stranded or detained.

The IOM reported this month that 5,100 immigrants arrived in Yemen so far this year, while 35,000 traveled in 2020 and 127,000 in 2019 before the outbreak of the coronavirus which suppressed demand for labor in the Gulf.

The UN agency often sends migrants back to their home countries from Yemen. But it said in April that more than 32,000 migrants, mostly from Ethiopia, were still stranded in the Arabian Peninsula’s poorest country.