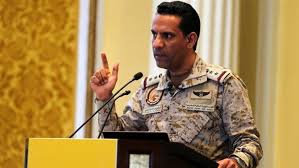 RIYADH: The Arab coalition destroyed five ballistic missiles and four explosive-laden drones launched by Houthis toward Saudi Arabia, Al-Ekhbariya reported on Thursday.
The attacks targeting Jazan are the latest in a long line of hostile actions against the Kingdom by the Iran-back Houthi militia.
Jazan University was one of the targets as well as other civilian sites protected under international humanitarian law, coalition spokesman Turki Al-Malki said in a statement on the Saudi Press Agency, adding that the actions amount to war crimes.
The attacks originated from Sa’dah governorate in Yemen, Al-Malki added.
The coalition said the attack is a continuation of the Houthis’ systematic and intentional hostile attempts to target civilians.
The Houthis, who took over the capital of Yemen, Sanaa, in 2014, have been condemned for their actions against the Kingdom.
The Saudi government has said the Houthi attacks are not only against the  Kingdom and its economic facilities, but rather the center of the global economy, the security of its exports and its oil supplies, while also affecting maritime navigation.

Saudi Arabia has consistently backed efforts to resolved the war in Yemen peacefully.
Last week, Saudi Arabia’s Deputy Defense Minister Prince Khalid bin Salman held talks with Yemeni Prime Minister Maeen Abdulmalik Saeed, and reiterated that the Kingdom supports “all efforts to end the conflict, implement a cease-fire, alleviate the humanitarian crisis, and reach a political resolution that guarantees peace and prosperity for the brotherly people of Yemen.”
In March, Saudi Arabia announce a peace initiative to help end a war that has ravaged Yemen for the last six years. The initiative, which has received wide support, includes a cease-fire supervised by the UN, the reopening of Sanaa airport, and new talks to reach a political resolution to the conflict. Restrictions on the Red Sea port of Hodeidah would also be eased, allowing access for ships and cargo.
The UN’s chief, Antonio Guterres, backed the deal and urged all sides to take this opportunity to pursue peace and work with his special envoy, Martin Griffiths, on ways to proceed “in good faith and without preconditions.”

Yemen’s information minister, Moammar Al-Eryani, said members of the international community with open channels to the Houthis must use their leverage to encourage it to sever ties with Iran and commit to the Saudi-led peace initiative.
“These countries must put pressure on the Houthis to stop their daily crimes and violations against civilians in their areas of control, which are considered war crimes and crimes against humanity,” Al-Eryani told Arab News in an interview last week.
A Yemeni news agency reported last month that the Houthis had “provisionally” accepted the Saudi initiative to end the war in Yemen, but were demanding unchecked flights from Sanaa airport to unlimited destinations before giving the peace plan their final approval.