Corona out of control in Pakistan 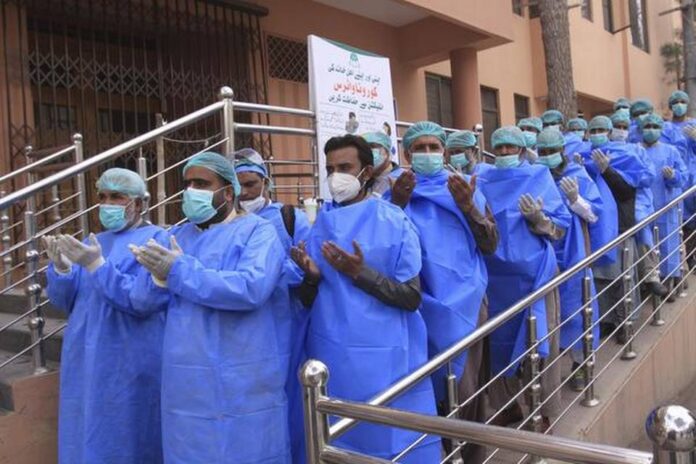 Once again corona virus is spreading rapidly in the country. Death toll is rising on daily basis and number of affectees is also increasing. Government once again emphasizing on people to take precautionary measures and to follow SOP’s otherwise it will become difficult to control the circumstances. It is correct because until now there is no remedy of this tinny virus which is so dangerous and had taken lives of so many people. According to a report the death ratios in the country is going high and high and it had reached  up to 7,092 and  confirmed cases of corona has reached up to 352,296.

According to the latest figures from the National Command and Operations Center, 2,304 new cases were reported, with 1,08,822 in Punjab, 1,053,051 in Sindh, 41,472 in Khyber Pakhtunkhwa and 16 in Balochistan. 274,416 in Gilgit-Baltistan, 23,122 in Islamabad and 5,139 in Azad Kashmir. These statics are the solid proof of prevailing situation in Pakistan. Last day chief justice of Peshawar High court justice Waqar Seth died due to corona. He was under treatment in a private hospital of Islamabad. Prime Minister Imran Khan, Army chief and president have said chief justice Peshawar High court a big demise. Similarly an additional judge serving in Lahore had also died. Several doctors who were serving in different hospital had lost their lives due to corona virus. Number of paramedics are also the victim of this fatal virus.

The situation is becoming grave day by day. Chairman disaster management General Afzal himself had become victim of it. There is a dire need to follow remedial steps otherwise like other countries of the world Pakistan can face problems. Our health system is unable to face huge burden of patients. Health department and experts already have warned the people that it not possible for our department to handle large number of patients. No doubt matter is so complicated. Because no one is ready to shut market, to close educational institutions, to close marriage halls and to close cinema and theaters. It is also a reality that business community is badly affected due to corona virus along with other departments of life. Countries economy also suffers a lot. The saddest aspect is helplessness of human beings in all this situation. It’s a big question that how to face this virus which is present in air and can spread from man to man. Human beings history tells that they had faced such kind of sufferings in past at number of occasions. Once plague was a cureless disease. Uncountable people became victim of this disease. Similarly due to other diseases lacs of people died.

On the other side it is reality that everyone had to taste death one day. But so helpless no one had this idea. All these circumstances demand to adopt precautionary measures. People should follow the SOP.s explained by WHO and governments. European and other countries are facing horrible circumstances. The most powerful country of the world USA is unable to face corona virus. UK, Italy and other progressive countries which had outstanding health systems cannot do anything for their people. The only thing is that Pakistani people are not taking this virus seriously. It’s the demand of the time to comprehend the ground realities. The ground reality is that our health system is unable face burden. We do not have strong systems. This is our poorest aspect that even passing more than 70 years we are unable to develop a complete system like progressive countries of the world.

It is fact that those countries which had strong system have completely failed to face this virus. People are dying day and night. In Pakistan the situation is also not favorable but people taking it as a joke. There is a need to tackle it seriously. On the other side all political parties whether part of opposition or Government they should play their role to unite people to face this calamity. Government should also take opposition parties on board to handle coronavirus.