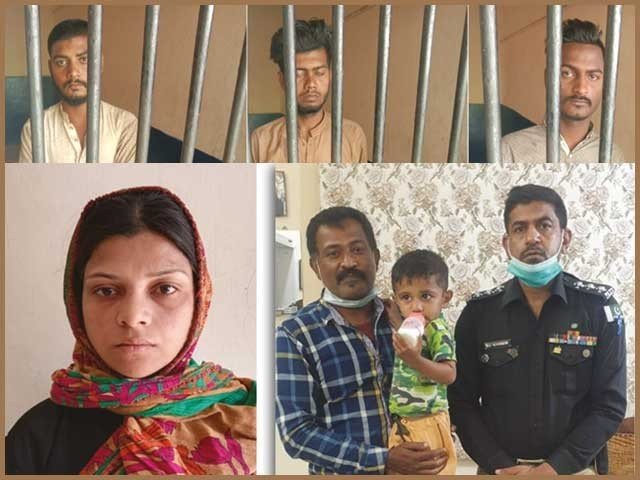 Karachi: What man does not do for the fulfillment of desires, if the desires are good, Allah also helps from the unseen, but if malice is included in them, then man reaches a place where there is nothing but shame and disgrace.

Two such incidents took place in the city of Karachi in the last few days in which unreasonable desires kidnapped a rickshaw driver and a school owner and pushed them behind bars. 2-year-old Aman from Shara Faisal Star Gate Moria Goth went out of the house while playing and went missing, leaving his family devastated.
The father of the minor boy lodged a case of his abduction at the airport police station while SSP Malir Irfan Bahadur also mobilized on the report of the abduction of the child and he immediately traced the child to SHO Airport Kaleem Musa. Given the task of installation.
Police later found footage from a closed-circuit camera, which showed young Aman walking toward the main road with small steps in his tune. Meanwhile, a rickshaw comes to a stop near the child and the rickshaw driver picks up the child and sits next to him.

SSP Malir Irfan Bahadur said that after a hard struggle, the airport police obtained the registration number of the rickshaw and found out its address which belonged to Shah Latif Town, on which a special team of police raided the house. After rescuing the abducted child, 2-year-old Aman arrested rickshaw driver Sikandar Ali, who revealed during preliminary investigation that he is the father of 2 daughters and in the desire of male offspring, he left the minor child alone while walking on the road. Seeing this, he sat down with her and took her home.

The family and neighbors were overjoyed when the news of Aman’s recovery was received at the mourning house. They appreciated the efforts of SSP Malir and SHO Airport and said that the immediate action of the police had helped us. Recovered a lost liver that deserves less praise.

The second incident of wish fulfillment took place in Iqbal Market Sector 11:30 in Orangi Town where Fazal, the owner of the school, played a vicious game with the help of his colleague Arsalan to fulfill his wish. Caught in the trap of The owner of the school kidnapped 13-year-old Muzammil, a student at his own school, on March 18 with the help of a colleague and demanded a ransom of Rs. 300,000 for his release.

The case was registered by Iqbal Market Police at the instigation of the abductee’s cousin and the investigation was transferred to the Anti-Violent Crime Cell (AVCC) while CPLC is also working with the police to track down the abductee. In a joint effort, AVCC and CPL raided a house under construction in Sector Sare Giara area of ​​Orangi Town and rescued abducted student Muzammil and arrested school owner Fazal and his accomplice Arsalan. did it.

AVCC police said that during the interrogation, Fazal, the owner of the school, revealed that he wanted to marry the student Muzammil’s sister while they were financially weak, on which he kidnapped Muzammil and pretended to demand ransom. Created so that he could earn the trust and sympathy of the family by paying the ransom money himself and under the burden of this kindness, the family of the abductee agreed to the marriage.

On the other hand, SHO Sharifabad Inspector Kamran Haider, after several days of hard work, took the domestic aunt involved in the robbery at the house of slain Muttahida Qaumi Movement (MQM) leader Dr Imran Farooq along with her husband, brother-in-law and friend into custody. Inspector Kamran Haider said that the mother and sister of the slain MQM leader Dr Imran Farooq are living in Federal B Area Block One area of ​​Sharifabad. A robbery took place in their house on February 25, 2021. The robbers took the family hostage and looted two mobile phones and cash before fleeing.

After the incident, the police kept a close watch on Aunty Nusrat Jahan alias Ayesha as she was present in the house at the time of the incident and she also handed over her mobile phone to the accused. However, after several days of hard work, the police Aunty Nusrat Jahan alias Ayesha arrested her husband Abrar Ali, Dewar Mohammad Arsalan and her friend Mohammad Farhan and recovered mobile phones, cash and a motorcycle used in the incident.