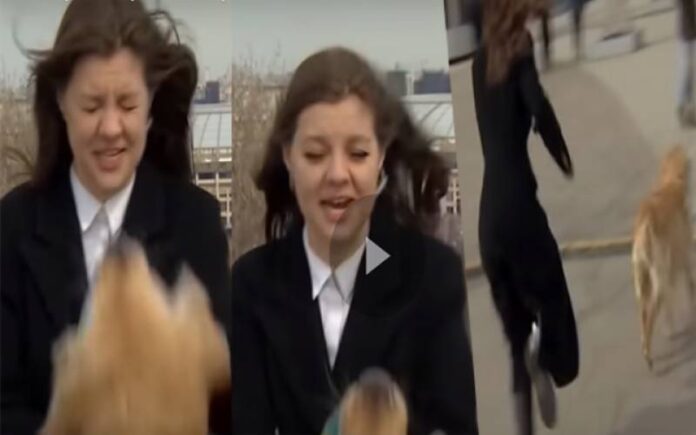 Russia
There are many incidents that leave their mark on the minds of the people, which either make you laugh or make your heart sad, but in this video, there is an incident in which a dog snatched a mic from a female reporter and fled. The reason is that it is rapidly going viral on the Internet.

According to the details, there have been incidents during live reporting which are still etched in the minds of the people and for a moment their attention is drawn towards it. Getting a live show or news to the public is definitely one of the difficult tasks. Only a media walker or anchor knows what steps to go through to gather solid evidence or to pass information on to a live show. You would also know this during a live show on TV. That is, something cannot be cut and repeated.
Now the interesting incident that has come to light has hidden a storm of laughter. It happened that a female reporter was reporting live. At that moment, a dog came in front of the camera and did not say anything to the reporting woman. Snatched away, video of this interesting incident has gone viral on social media.

This interesting incident took place in Russia. In the video, it can be clearly seen that a female reporter is reporting live and making some predictions regarding the weather. At the same moment, a brown cat came to the woman and snatched the mic. While the woman also ran after him, the woman’s cameraman made all the videos of the incident. The woman finally grabbed the dog and took it back. Social media users ridiculed the incident and made mixed comments.