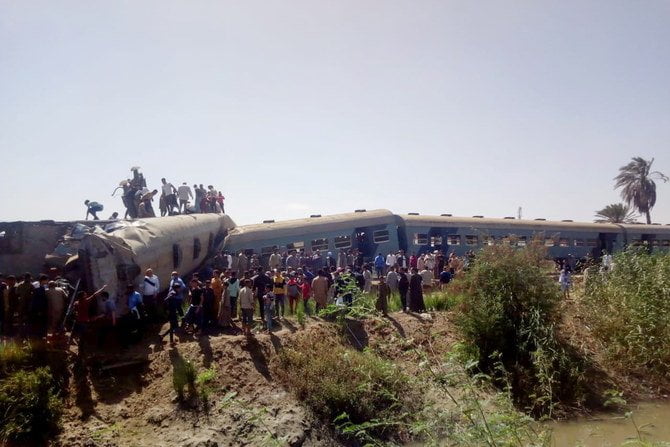 CAIRO: A train smashed into the back of another killing 32 people and injuring at least 66 more after “unknown individuals” triggered the emergency brakes in one of the trains causing it to stop near the Egyptian city of Sohag, Egypt’s railway authority said on Friday.

Khaled Mujahid, a spokesperson for the Ministry of Health, explained that immediately after the accident, 36 ambulances were dispatched to transport  some 50 injured people to hospitals.

Egyptian prime minister Mostafa Madbouly ordered  officials to go immediately to the scene, to provide the necessary support and swiftly deal with the situation on the ground.

Madbouly decided to activate the crisis room at the Cabinet’s Information and Decision Support Center in order and to coordinate between the ministries and the concerned authorities, a security source said.

Police detained both train drivers according to Sky News Arabia.

At least two carriages overturned between the stations of Maragha and Tahta, it said in a statement.

Egyptian President Abdel Fattah El-Sisi on Friday vowed “deterrent punishment” for anyone found responsible for the collision of the two passenger trains.

“Anyone who caused this painful accident through negligence or corruption, or anything similar, must receive a deterrent punishment without exception or delay,” El-Sisi said in a tweet