Efforts of China and Russia to reshape the international system 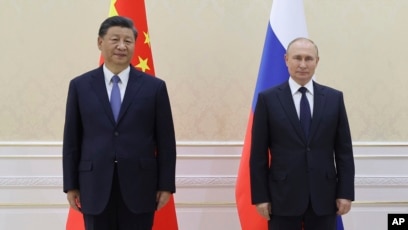 In February 2022, Russia attacked Ukraine, which has now become a terrible situation, Russia is facing anger from many countries in the world, especially from the United States and its allied countries, NATO and other organizations. Since Russia has been declared an aggressor, sanctions have been imposed on Ukraine by many countries, including Germany and the United States A huge amount of weapons were also supplied from the country, while fighters from all over the world also arrived in Ukraine, due to which Russia is facing difficulties in Ukraine.

Now the retreating Ukrainian army is turning around and attacking the Russian army. The world turned against Russia, but China is the country that stands with Russia today. After the attack on Ukraine, the first open meeting between Chinese President Xi Jinping and Vladimir Putin took place on the platform of the Shanghai Cooperation Organization. Xi Jinping and Putin appeared to convince the member countries of the Shanghai Cooperation Organization that the time has come to reshape the international system. The politics of embargo should be abandoned, and the formation of the international system should be worked together to promote a more correct and rational direction.

They will give up the struggle. Russia presented this summit as an alternative to Western organizations while the world knows that there is anger in China on the American support for Taiwan. Just as China does not accept the US intervention in Taiwan and if the US does not do this intervention. If it stops, China can go to any extent, just like this was the case between Russia and Ukraine. Russia did not accept the efforts of Ukraine to become a member of NATO, which Putin had openly expressed, but despite this, the struggle for Ukraine to become a member of NATO continued, which was now close to success, so Russia took an extreme step and attacked. gave The whole world, including Russia, Ukraine, is having to pay the consequences of this attack. All over the world, from petrol to food, everything has not only become expensive, but is also not available. It is felt that whatever happens, China and Russia are now behind in bringing a new world order or a new system in the world. China and Russia are ready to face all the difficulties that America and its allies put up. World analysts have different opinions about this effort of China and Russia, some believe that China has stood up against the increasing influence and influence of the United States, which is now taking the form of madness and its end is not looking good. I do not, but there are serious differences between these countries and some say that the governments of the member countries of the Shanghai Cooperation Organization may go against the United States and the West, but the people are leaning towards the United States. India and Kazakhstan are great examples of this, where anti-China sentiments are found in the people. On the other hand, there are countries where there are feelings between America and Western countries, in which Pakistan and Iran are at the top, and the rulers of Iran also have anti-American feelings. This means that where there is opposition to China and Russia. There is also their support. In such a situation, the situation is also interesting and the tension is increasing, if the US continues to intervene in Taiwan despite China’s warning and increases its role in Ukraine, then the situation will turn out in any direction.