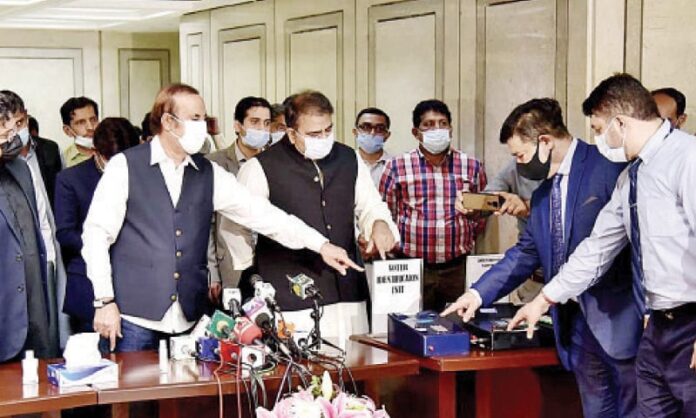 Minister for Science and Technology Shibli Faraz has also been instrumental in clearing the EVM and not only rejects all the objections of the opposition but also criticizes them.

On the other hand, Prime Minister Imran Khan has been given a detailed briefing on the locally developed Electronic Voting Machine (EVM) and a practical example of its performance, while the Prime Minister said that the Electronic Voting Machine (EVM) will be used in the upcoming elections. It will be used and the opposition will accept the results without objecting to fraud. If the opposition loses, it will admit that it has defeated them in a clear and transparent manner.

Addressing the ceremony of inheritance certificates for Punjab, he said that former US President Donald Trump challenged the results in the US presidential election but the EVM machine was used in the election so nothing happened in the US.

The Election Commission is being bombarded by the government and the ministers have taken a tough stand.

On the other hand, PML-N president and opposition leader Shahbaz Sharif has rejected a proposal by Prime Minister Imran Khan to use an electronic voting machine.

In a statement on Sunday, Shahbaz Sharif said that the electronic voting system was rejected by the whole world and the Election Commission in Pakistan has also declared it unworkable.

The Leader of the Opposition said, “Such important national tasks cannot be carried out at the behest or order of an individual. The sensitive work of electoral reform is done with the will and confidence of the entire nation.”

The PML-N president said that the country’s reputation is enhanced by justice, transparency and rule of law, not by electronic voting machines.

Shahbaz Sharif further said that the aspiration and confidence of the people is reflected in the parliament which has been locked for three years. “Electoral reform is possible with the consultation of all parties, the light of public opinion and consensus.

The opposition and the government are at loggerheads over the use of electronic voting machines and are attacking each other. Government ministers have also taken a stand against the Election Commission. On the one hand, those who talk about the strength of institutions, on the other hand, they line up against every institution that is the government

Meanwhile, the federal cabinet has approved the issuance of an ordinance for electoral reform under which elections will be held through electronic voting machines instead of traditional ballot papers and the way will be paved for giving the right to vote to Pakistanis abroad. The ordinance was approved by the federal cabinet at a time when Prime Minister Imran Khan has invited opposition parties to discuss electoral reforms. However, the opposition parties did not respond positively to the Prime Minister’s invitation and the opposition parties have rejected the EVM system.

Opposition The country’s expert jurists have also sharply criticized the government’s approach. Senior lawyer Rashid A. Rizvi believes that the government has not been given the right legal advice on electoral reform. “If something can be passed by a simple majority in parliament, it has been made controversial by an ordinance and making the electoral process controversial will not lead to reforms, already an electronic voting machine,” he said. But there are doubts and the government should have debated and clarified that this machine cannot be hacked.

Ahmed Bilal Mehboob, head of PLDAT, while talking to Urdu News, said, “I wonder why there is a need to bring an ordinance when the government has numbers in the National Assembly.

“The method adopted by the government will make the election process more controversial. Electoral reforms are done to end the controversy, but when you issue an ordinance without consultation, it is from day one,” he said. It will become controversial.

Ahmed Bilal Mehboob says, “I think the government is preparing for early elections and may even consider holding early elections by extending the ordinance to 240 days.” Because this ordinance has nothing to do with the 2023 general election.

Ahmed Bilal Mehboob said, “It is a meaningless act to invest billions of rupees to bring a system on which there is no political consensus, so why buy a new controversy by investing so much money.”

“There are many countries that are far ahead of us in technology, but they do not use technology in the electoral process,” he said. “The Netherlands, Germany and Ireland have returned to the ballot paper with the introduction of electronic voting because it lacks transparency.”

This is the story of the debate that is going on in Pakistan at the moment. The government is insisting on holding the next election using electronic voting machines while the opposition is not ready to accept it.

If we look at the world now, these electronic voting machines are currently being used in 31 countries of the world including Argentina, Armenia, Australia, Bangladesh, Belgium, Bhutan, Brazil, Bulgaria, Canada, People’s Republic of Congo, Dominican Republic. , During political elections in Ecuador, Estonia, Fiji, France, India, Iran, Iraq, South Korea, Kyrgyzstan, Mexico, Mongolia, Namibia, New Zealand, Oman, Panama, Peru, Russia, UAE and USA Electronic voting machines are being used or have been used. In Pakistan too, the government at the moment seems determined in this regard. India, Bhutan, Venezuela and Brazil are using electronic voting across the country. In Bangladesh, the Election Commission has successfully used its own voting machine in pilot projects, but it is not yet being used nationwide. Voting machines were tested in Finland in 2008, but were rejected in 2016-17 because the risks to Internet voting outweighed the benefits.

Given all these facts, it can be said that it is not a bad thing to move towards modern technology. However, it is important to make this process transparent. It remains to be seen which countries have adopted electronic voting machine Considering the huge losses, electronic voting was rejected. In this regard, these losses will have to be reviewed. It will also have to be seen whether such losses will not occur in Pakistan. However, this is not possible with the aggressive approach of the current government.