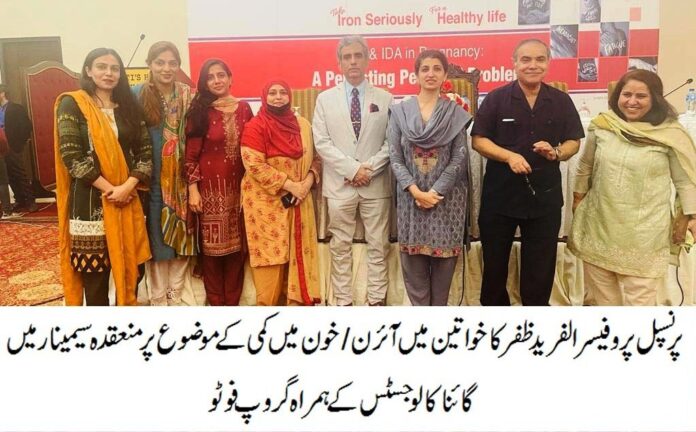 LAHORE, November 25:
Principal Post Graduate Medical Institute & renowned Gynecologist Prof. Dr. Sardar Muhammad Al-freed Zafar said that about 800 million women worldwide suffer from iron deficiency of which 56% are from developing Asian countries and unfortunately Pakistani women are also anemic in a large number as well.
He expressed these views while addressing a seminar on Blood / Iron Deficiency in Pregnant Women here, today organized to highlight this topic. Prof. Dr. Uzma Hussain, Prof. Alia Bashir, Prof. Ayesha Malik and other gynecologists gave lectures and said that it is important for pregnant women to take folic-acid tablets for healthy diet, elimination of vitamins and iron deficiency. Prof. Al-Freed pointed out that the early marriages and without a reasonable interval pregnancies are important reasons while lack of adequate food due to poverty lead to anemia in women which not only puts their health at stake but also create other problems. He said that even babies are born with physical/mental weakness and disability due to the same factors. He stressed that there is a need to provide awareness in this regard at the social level so that these problems can be addressed. Dr. Shabnam, Dr. Saira, Dr. Samina, Dr. Farukh, Dr Aliya, Dr. Uzma, Dr. Mahwish, Dr. Rizwana including a large number of gynecologists were present on the occasion.
Principal PGMI said that it is very important to pay attention to the diet of pregnant and lactating women and the primary responsibility of the concerned families is that the child born in the world should be completely healthy but this will be possible only when the daughter is given same importance being born in the society. He added that there is a need for women empowerment in rural population as it is natural to give preference to sons in working families so that they can help and support their elders in work and farming. However, a closer look reveals that a large number of women are working tirelessly in the fields, orchards, factories and offices, contributing equally to the financial support of their families, so they should be given equal importance in the affairs of their lives.
Talking to media, Prof. Al-freed said that in general, parents pay more attention to the upbringing of their boys and also pay special attention only to their education and food. Thus, in our society, girls and women are neglected socially which in not a good sign. He said that due to lack of education and malnutrition, girls are not able to grow up properly and they remain physically weaken. As a result, women easily suffer from anemia which causes many complications for them during pregnancy. He said that due to lack of resources, most of the women’s faces also wither and after motherhood their own newborns are not even able to breastfeed, so we need to pay special attention to maternal and child health and raise awareness among the people about this important issue.