Glow and behold! The 25 best aurora pictures of 2021, from dazzling light shows in Alaska to heavenly displays over Tasmania and New Zealand 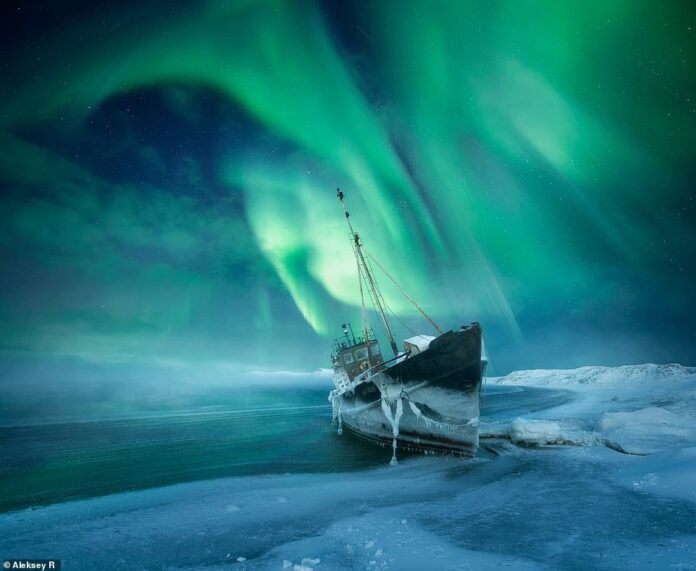 They’re some of the most illuminating photographs you’ll ever set eyes on.

Here we present the best aurora pictures taken around in the world in 2021, as chosen by travel and photography blog Capture the Atlas.

They are in the site’s Northern Lights Photographer of the Year collection, which it presents each year. 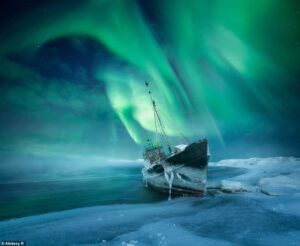 Capture the Atlas said: ‘The quality of the image, the story behind the shot, and the overall inspiration that the photograph can provide are the main factors for selecting the images every year.’ Dan Zafra, editor of Capture the Atlas, curates the photos throughout the year, ‘looking for images taken by some of the most renowned photographers, but also for new talents and for new locations where the Northern Lights haven’t been photographed before’.

Scroll down for the glow-down on this year’s list..This image was captured in February in Teriberka, in the Kolsky District of Murmansk Oblast, Russia, on the Barents Sea coast. The photographer, Russian Aleksey R, said: ‘This night was definitely special. The perfect conditions for shooting the Northern Lights came together: frost, ice, a full moon, a clear night, and no wind. The weather was extremely difficult – the temperature was 34 degrees below zero, but flames like these make you forget the temperature. I had a certain vision of the photo I wanted and, because of the extreme weather, I had to build the photo in stages. Thanks to the moonlight, the landscape was nicely illuminated, and I got a decent balance with the overwhelming display of the aurora borealis. 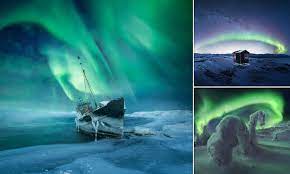 To get the most out of this opportunity, I took a combination of shots: one for the foreground and one for the sky. That way, you can see more detail in the foreground while retaining the detail in the Northern Lights’.This incredible image was taken at Lake Sakakawea in North Dakota. The photographer behind it, Marshall Lipp, said: ‘After following the space weather for a few days, I knew that there was a good chance the Lights were going to be out during this fall, so I went to one of my favorite places and set up my gear in hopes the aurora would show. And it did! I was in amazement as it danced overhead at times, and I was able to capture some images just how I envisioned them’.LEFT: A dazzling image taken in Iceland by Slovak landscape photographer Filip Hrebenda, who said: ‘Although the best time to see the aurora in Iceland is mainly from the fall to early spring, I took this photo in the southeast of Iceland during the late spring. After three days of shooting volcanoes without sleeping, I was really tired, but when the KP index jumped to four [the higher the number out of nine, the greater the chance of seeing an aurora], I knew I would not be sleeping again that night. I found an interesting foreground with colour reflections and waited for the aurora to appear. All of a sudden, she started dancing exactly where I wanted – right above the mountainside! It had been a long night, but the adrenaline gave me enough energy at that moment to keep me awake until morning.’ RIGHT: A stunning photograph of a spectacular aurora display over Regina in Saskatchewan, Canada. 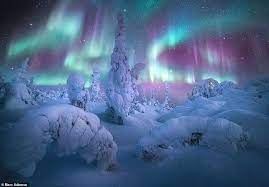 The photographer, Herry Himanshu, said: ‘In all my years of aurora chasing in Saskatchewan, I had never seen such vivid, fast-moving, wild formations and incredible, purple, pulsating lights. A friend who was also out shooting the Lights phoned me at 1am when the skies were going berserk and we were both just hysterical, probably howling louder than the coyotes in the distance. 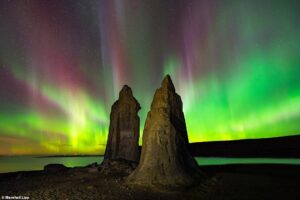 That night, I only got a couple of hours of sleep before going to work, but I was buzzing off the aurora high all day’.This mesmerising image was taken in Alaska by Marc Adamus, who said: ‘Wandering around these forests coated in rime ice is one of the most magical experiences, but also one of the most difficult to capture. Temperatures are often in the minus 30s and negotiating the easily broken, crusty snow on snowshoes with nothing but a headlamp makes for great challenges in hiking and composing. I used the last light of twilight to set up the shot you see here and returned to it hours later as the lights were dancing overhead’.

Share
Facebook
Twitter
Pinterest
WhatsApp
Previous articlePrincess Charlene ‘hiding from public view’ because she is ‘disfigured’ and ‘scarred’ from ‘plastic surgery’ in Dubai, royal expert claims – as she remains in treatment facility
Next articleSeminar was organized about sustainable use of ancillary industrial products in UET Lahore