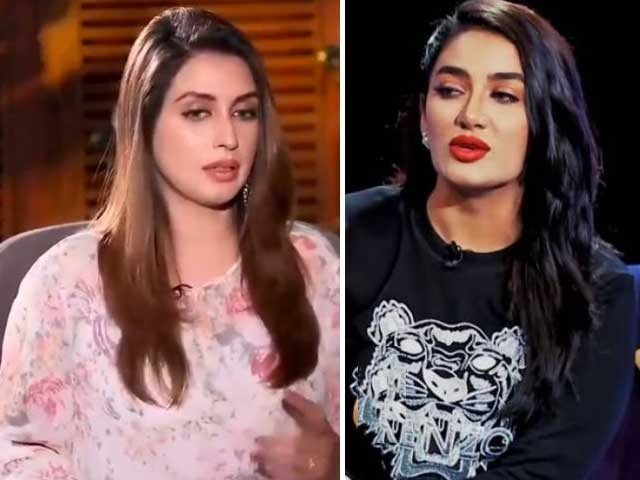 Iman Ali has been under fire for the past few days for hurting and mocking the feelings of the eunuch community. While anchor Rabia Anam called her a fool for making fun of the eunuch community, Kamisid (eunuch model) also took her by surprise and now actress Mathira and Hamaima Malik have also raised their voices on the issue.

“I don’t know why people use words like ‘measles’ and ‘aunty’ to insult someone,” Mathira wrote on Instagram Story. Faith is a very beautiful woman and she needs mental help.
Read also: Iman Ali faces severe criticism for comparing himself to an eunuch 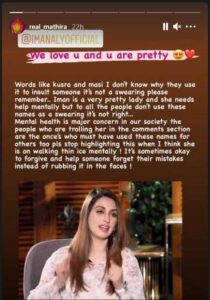 “Mental health is a big issue in our society. All the people who are criticizing Iman Ali in the comment box are the ones who use these words to insult someone else,” Mathira added.

Speaking in support of Iman Ali, Mathira told all those who criticized Iman Ali that sometimes it is better to forgive people and help people to forgive their mistakes, instead of constantly telling this person about it. Make mistakes.

Actress Hamaima Malik has also raised her voice on the issue. “We grow up in a society where it is normal to look down on others,” he wrote on Instagram. Our transgender community is not disrespectful to us, they are also God’s created creatures and human beings like us.

Instead of being loved in the same way as other creatures created by God, eunuchs are looked down upon and ridiculed in our society.

I believe that as celebrities it is our responsibility to choose our words very carefully and instead of hurting anyone’s feelings with our words we should try to make people do something good with our attitudes and words. 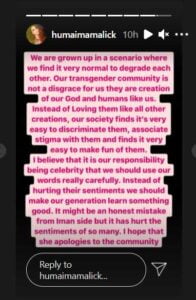 Hamaima Malik said that it may have been an unintentional mistake of faith but her mistake has touched the hearts of many people. Hopefully Iman Ali will apologize to the transgender community.

It should be noted that Iman Ali compared himself to “measles” in actor Wasi Chaudhry’s program “Panic is forbidden” and said that he does not take selfies because he does not like himself and when he is mobile. When I look at myself, it seems that there is a “measles (eunuch)” standing.