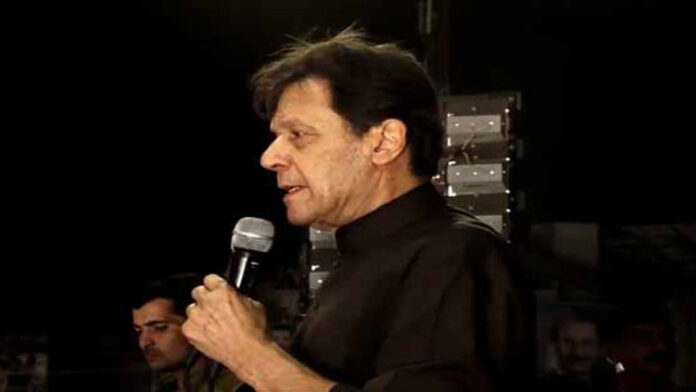 FAISALABAD (C News) – Pakistan Tehreek-e-Insaf (PTI) Chairperson and former Prime Minister Imran Khan on Sunday said that people who were scared of the long march planned to kill me. I have recorded a video taking names of the conspirators. Imran Khan asked masses to bring conspirators to justice if he got assassinated.

Addressing a rally in Faisalabad the PTI chairperson said that the nation is not ready to accept slavery, they will get real freedom after reaching Islamabad. He said the conspiracy against the country was hatched in America, while the Mir Jafar in the country supported the foreign conspiracy.

Today the fugitives are sitting in London making national decisions, he added.

Talking about the problems being faced by public he mentioned that unemployment is the biggest issue in the country. I increased employment in the country. In our three and a half years, the textile industry of Faisalabad broke all records, he continued saying.

Textile industry, power looms were closing in Faisalabad, he added.

Criticizing the PMLN leadership he said that the price of chicken has doubled because Hamza Shehbaz is in the chicken business.

He further mentioned the contributions of PTI government to the country saying that the rupee is falling and inflation is rising. In our time there was a record production of four crops. Record farmers in our time got money.

In our time, the country’s wealth was increasing, said Imran Khan.

Mentioning the Interior Minister Rana Sanaullah, Imran Khan claimed that Rana Sanaullah has killed 22 not 18, adding that one cannot qualify for ministry in their (PML-N) government till the person has committed a crime. You will hear only two words from people ‘thief and traitor’, he exclaimed.

The PTI leader added that death is better than slavery.