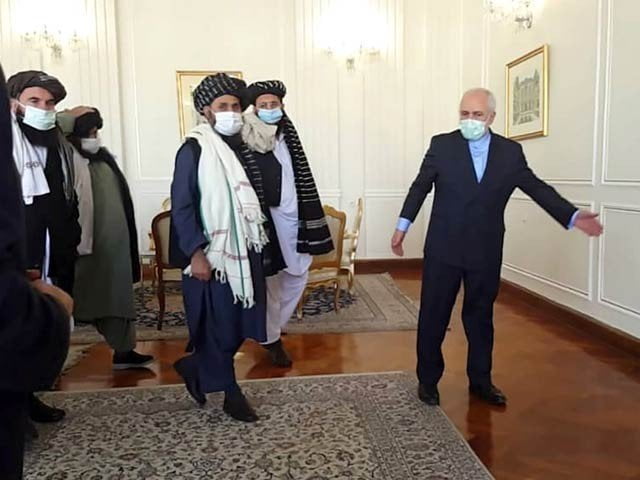 Haran: Iran has offered the Taliban to mediate and co-operate in the ongoing talks with the Afghan government.

According to the Iranian News Agency, Jawad Zarif welcomed the delegation led by Mullah Ghani Bradar, the Taliban’s political affairs chief in Tehran. On this occasion, Iran’s stalled peace talks with the United States in Qatar. Arrival mediation has been offered for peace in Afghanistan.

Iranian Foreign Minister Jawad Zarif said that we will fully support the formation of a government consisting of all ethnic groups and schools of thought living in Afghanistan. According to the Iranian news agency, Jawad Zarif told Mullah Ghani Baradar that the United States was not a “good mediator” for the ongoing conflict in Afghanistan.
In a tweet, Taliban spokesman Mohammad Naeem wrote that the meeting with Iranian officials was held in a cordial atmosphere in which the current situation in Afghanistan, inter-Afghan talks, full implementation of the Doha Agreement and important issues related to peace in the region including Afghanistan were discussed. ۔

It should be noted that President Biden has indicated that he will reconsider the agreement reached with the Taliban after taking office, and the Afghan peace talks had stalled due to the ongoing elections in the United States. In this situation, Iran’s offer of cooperation to the Taliban is an unconventional move.

Although Washington has previously accused Iran of secretly supporting the Taliban, relations between the two have always been complicated and generally considered rivals. That is why Iran was cautious when it began direct talks with the Taliban.

The Taliban’s talks with the Afghan government began this month, but diplomatic sources say no significant progress has been made. According to another report by the foreign news agency Reuters, some NATO personnel will remain in Afghanistan until May 2021 because the Western allies of the United States are of the opinion that the conditions are not right for a full withdrawal from Afghanistan.

NATO has already been reluctant to back Trump’s Afghan policy, but Biden’s hint of revising the agreement with the Taliban has once again made the Afghan peace process uncertain. Iran’s offer of talks to the Taliban is a significant step.