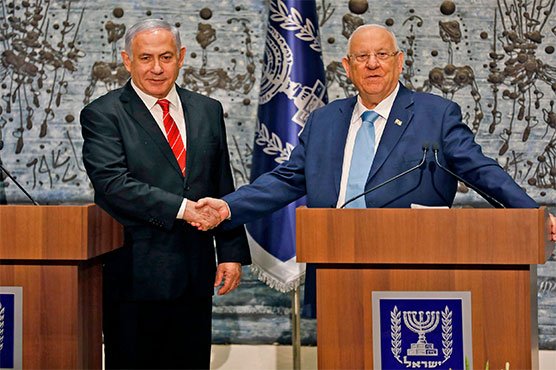 Israel s fourth vote in under two years failed to produce a clear path for any candidate to form a coalition capable of commanding a majority in the 120-member parliament, prolonging an unprecedented phase of political gridlock.

On Monday, President Reuvin Rivlin held the traditional round of consultations that follow each Israeli election, seeking recommendations from party representatives on who they want to lead the government.

Rivlin said the tally indicates that “Benjamin Netanyahu has a slightly higher chance of forming a government,” as he announced the nomination.

But, echoing the sentiments of many Israeli analysts, he warned a 61-seat absolute majority may not be possible in the deeply divided legislature.

Rivlin said his consultations “lead me to believe that no candidate has a realistic chance of forming a government that will have the confidence of the Knesset”.

Addressing his newly sworn-in Likud allies, Netanyahu pledged to make “every effort to get Israel out of this cycle of elections”, declaring he would form a “strong government” that served all citizens.

As Rivlin was holding his talks Monday, Netanyahu was on trial across the city at Jerusalem District Court, charged with accepting improper gifts and illegally trading regulatory favours with media moguls in exchange for positive coverage.

In the prosecution s opening arguments and testimony from its first witness, Netanyahu was accused of using his influence to ensure the popular Walla site portrayed him favourably while smearing his rivals.

Rivlin, whose antipathy for Netanyahu is well known, said giving the mandate to the veteran leader was “not an easy decision on a moral and ethical basis”.

“I know the position held by many, that the president should not give the role to a candidate facing criminal charges,” he said.

“But, according to the law and the decision of the courts, a prime minister can continue in his role even when he is facing charges.”

Lapid reacted to the announcement by conceding that “the president fulfilled his duty and had no choice”.

“But assigning the mandate to Netanyahu is a shameful disgrace that tarnishes Israel and shames our status as a law-abiding state,” he added.

Netanyahu now has 28 days to form a government, which can be extended by a further two weeks.

His path to a majority is precarious. To raise his tally above 52, he will likely need support from Bennett, his estranged former protege.

Its leader, Mansour Abbas, has said he is open to dealing with Netanyahu if it helps improve living standards for Israel s 20 percent Arab minority.

In an address late Monday, Lapid sought to foster unity in the anti-Netanyahu camp, with a direct appeal to Bennett.

“We need a government of national agreement… to prevent a government led by a criminal suspect,” Lapid said, calling Netanyahu “dangerous”.

Lapid offered Bennett a revolving premiership in which the Yamina leader would take the first turn — an extraordinary gesture given that his 45 prime ministerial endorsements dwarfed Bennett s seven.

On Tuesday, Bennett confirmed that he had turned down an offer to lead a government because the proposed bloc would not have aligned with his values.

“I had no dilemma. I d never give up my principles,” he said, stressing the need for a “stable, right-wing government” in line with the positions of Israeli voters.

If Netanyahu fails to form a majority government within his negotiating window, Rivlin will likely turn to Lapid.

If neither Netanyahu nor his rivals manage to form a government, voters could be asked to return to the polls for a fifth election in barely two years.