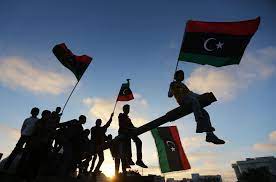 ROME: Italy considered Libya to be a “strategic priority” and has pledged to provide the peace-seeking north African country’s transitional government with “every assistance needed.”

Lorenzo Guerini, Italy’s defense minister, said that the presence in Libya of Italian troops was “part of an overall national strategy.”

He pointed out that Libya was of “huge significance” to Italy for a number of reasons, “from our national security, economic, historical, and cultural point of view.”

And the minister added that a democratic Libya could act as a barrier for Italy and the EU against the “strong jihadist presence in Africa.”

According to Italian military statistics, the country has 400 troops deployed in Libya, as well as a field hospital.

“Our approach to Libya always remains the same. We support the training to local security forces. And we intend this support to continue on a long-term basis,” Guerini told Italian daily newspaper La Stampa.

“This investment requires patience and persistence, but I am sure that the results we will achieve will be lasting and effective.”

Military and technical cooperation between Italy and Libya began in December following the signing in Rome of a bilateral agreement between the two nations.

“Our action is focused on providing training to the local security forces, but we will be happy to comply with the other priorities the Libyan government indicated, such as de-mining expertise and support for a military health service. We now look with confidence at the action of the new government,” Guerini said.

Italy is supporting the European Irini naval mission, launched in March last year by the Council of the EU, that aims to enforce a UN arms embargo on Libya. The operation in the Mediterranean was recently extended until March 2023.

Irini also has secondary tasks including monitoring illegal oil trafficking from Libya, helping to counter human trafficking and smuggling activities, and contributing to the training of the Libyan coast guard and navy.

Guerini added: “Irini should be strengthened. A wider contribution from the members states is needed so that the mission can fully reach its goals.”