Italy: Teen in hijab aims to be ‘Afro-influencer’ on TikTok 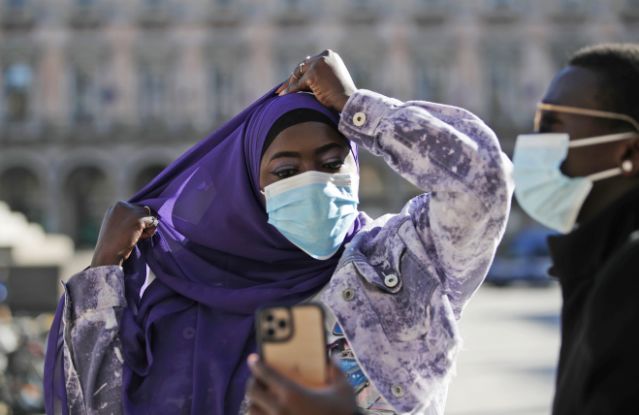 MILAN (AP) — In Milan’s chic Victor Emmanuel II Gallery, a spacious mall that would be jammed with shoppers were it not for the pandemic, a young Black woman wearing a violet hijab and matching lipstick propped up her phone and moved her hips to a tinny-sounding beat coming from the device.

Aida Diouf Mbengue, 19, was recording a TikTok video to share with her 330,000 followers. She is making a name for herself as a self-styled “Afro-influencer,” one of a group of young people of African origin who have come together in Italy to try to increase their social media clout.

Their campaign is not just about views and followers, Mbengue said. With her posts, she is trying to destroy stereotypes.
“I am representing girls with the veil,” Mbengue said in a recent interview with The Associated Press, “I have a large Italian following, and this makes me happy because most Italians do not have anything in common with me.”

As to her own identify, she is clear: “I am Muslim, I wear a veil, and I am also Black.”

Some three decades ago, immigration was a new phenomenon in Italy, a predominantly white, Catholic nation with a long history of emigration. Today, about 9% of Italy’s 60 million people are foreign nationals, according to the country’s national statistics agency, ISTAT.

Nearly one-fifth of those foreigners come from African countries, including Mbengue, She came to Italy from Kaolack, Senegal, with her family at age 3.

Mbengue, who is in high school, said she didn’t feel discriminated against as a student. But she says she started receiving racist messages once she started posting videos of herself in a hijab.

“The discriminatory phrases included the N-word, or ‘monkey,’ ‘Go back to your country,’ ‘I will throw a banana in your face,’” the teenager said. ”But then you realize it is just the usual people who want to make you feel bad, so you laugh about it or you just let it go, and that’s it.”

A quick glance through Mbengue’s TikTok and Instagram posts reveals that she also receives supportive comments and hundreds of red hearts and heart-eyed emojis every day.

Mbengue started making content for TikTok, a video-sharing social networking platform, on a whim in 2019 with a simple video. The comments indicated there was much ignorance about women who wear hijabs, with many assuming that a woman with a head scarf could not be funny, lighthearted or likable, she said.

“I realized I could use TikTok to open some minds,″ she said.

Mbengue, who started wearing a hijab when she was 7 years old, said she is bothered by comments from other hijab-wearers who have accused her of using the headscarf to attract attention on social media.

She lives with her mother, her father and four of her eight siblings in a small apartment in the Milan suburb of Romano di Lombardia and uses her smartphone to churn out dozens of posts a day.

Her mother, Die Mbaye, said people think that a “girl with a veil is not capable of doing exceptional things.” Speaking in Wolof language with Mbengue translating, Mbaye described her daughter as a “reference point for many girls who want to wear the veil but fear being judged.”

“Seeing someone doing TikTok might seem like something frivolous and superficial. She had to fight and push herself to get to this point,″ the designer said in an interview in Rome.

“Fortunately, this is the new face of Italy and we are not going back,″ Jean said.