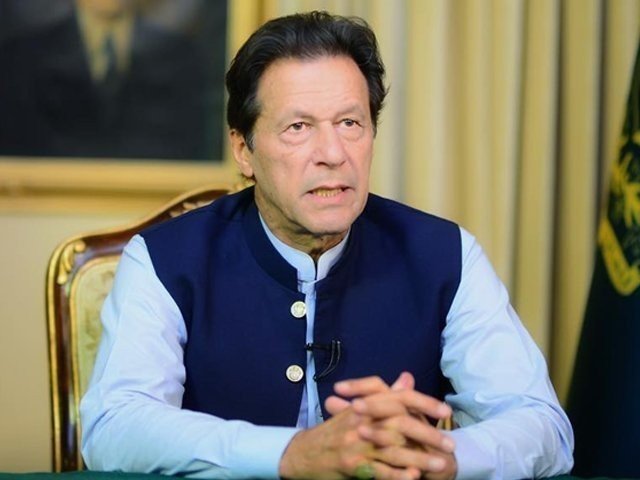 Islamabad:
Prime Minister Imran Khan said that they were asking Nawaz Sharif to give security bond but the judiciary sent him out. If the courts will not support him, how can they fight against corruption?

During a direct telephone conversation with the people, the Prime Minister said that in the first and second wave of Corona, Allah saved Pakistan from more damage, the third wave of Corona is dangerous, no one can say how far the situation can go. In that case, we need to be more careful.

The Prime Minister said that despite vaccinating people in Europe, they have been locked down. We are not locked down. Factories are also open. God forbid, if the situation worsens, then we will be forced to lock down wherever in the rest of the world. The poorest people are affected, masks are the easiest to wear, they must wear masks and be more careful than before.
Kashmir case fought in every forum

On relations with India, the Prime Minister said that the present government has fought the case of Kashmir at every forum. In the Emergency, only consideration was given to buying sugar from India. The Cabinet rejected the proposal to buy sugar from India. August’s move is not reversed, relations cannot return to normal.

Contracts with IPPs not in public interest

The Prime Minister said that no one talks about the good deeds done by the government, how did we stabilize the country, if we got Pakistan there was a deficit of ارب 20 billion, IMF lends at the lowest interest rate, IMF Other institutions also lend on getting loan from the IMF. The conditions laid down by the IMF include the State Bank. I have no property outside of Pakistan. I live and die in Pakistan. I will not do anything against the interest of Pakistan.

Asked about the presence of mafia in the cabinet, the Prime Minister said that people have high hopes but it takes a long time to change the old system. In our government, NAB and judiciary are independent while 95% of the cases were not made by us but they are old. In the previous government, the NAB was also involved in protecting the thieves. It is not easy to get a hand on the powerful. The bureaucracy has more relations with the old people. We have come in a democratic way. It will take time to change the system. This is a jihad and I am doing it only for Allah. Don’t underestimate the current inflation, look at Venezuela and other countries, the people will have to be a little patient for real change, our economy is now moving towards growth.

Frightened by inflation? Question from the Prime Minister

One woman asked the public about inflation, “Should we panic now?” On which the Prime Minister said that despite being an agricultural country, we are importing 70% pulses, the country is expensive due to high profiteering of middlemen, bringing a system where farmers deliver goods directly to the markets, improving the economy. Due to the rupee has also strengthened, there is no need to panic, our entire focus is only on controlling inflation, work is being done to find out the cause of inflation and we will show control.

The Prime Minister said that corruption is a cancer which has spread not only in Pakistan but in every poor country. Corruption of the rulers makes the countries indebted. Corruption destroys the rich countries. One thousand billion dollars are stolen from poor countries every year, the whole nation fights corruption together, Imran Khan cannot fight alone. He was telling Nawaz Sharif to give security bond but the judiciary sent him out. Making law will not end corruption, we all have to work for it. How can we fight against corruption if the courts do not agree?

‘The real thing is law enforcement’

The Prime Minister said that the small class has a habit of making money by sucking blood, people like us are trying to bring everyone under the law, flowers are being thrown at those who steal sugar worth billions of rupees.