Long March will continue till end of Government, PDM 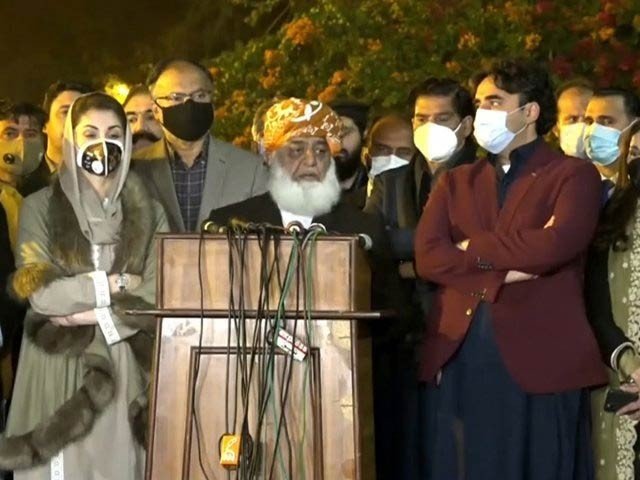 According to details, the meeting of the steering committee of PDM was held under the chairmanship of Convener Ahsan Iqbal. The meeting discussed the arrangements and duration of the long march.

After the meeting, PDM spokesman Mian Iftikhar Hussain said that the PDM believes that the only solution for open voting in the Senate elections is a constitutional amendment. The opinion of the Election Commission is correct that there should be a constitutional amendment.
He said that PDM has formed a five-member committee for the long march which will include Ahsan Iqbal, Nayyar Bukhari, Mir Kabir Shahi, Mian Iftikhar Hussain and Akram Durrani. The long march will start from across the country on March 26. The provinces will be visited under the leadership of Shahid Khaqan Abbasi, all trade unions will be contacted.

Mian Iftikhar Hussain said that the long march will be called National March and Inflation March. On Friday at 3 o’clock PDM will participate in the sit-in of missing persons. The only demand of the heirs of the missing persons is that the Prime Minister should come and meet them.

He said that the Prime Minister did not even visit the corpses in Quetta and said that they could not be blackmailed by placing the corpses. Are fake prime ministers arrested? If they are arrested, let us know and we will start a movement for their release.

Mian Iftikhar Hussain further said that all the arrangements for the long march have been completed and this march will continue till the government leaves.