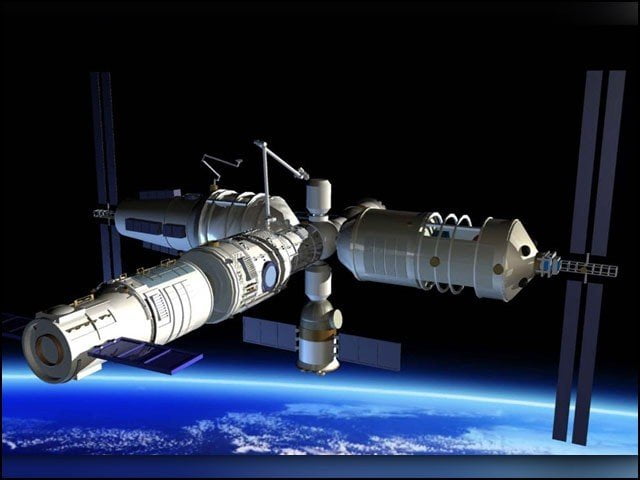 BEIJING: The most important and central part of the Chinese space station “Tiangong 3” (core module) has been successfully launched into orbit tonight.

According to the details, the main module of the Chinese space station was successfully launched from China’s Wenchang space launch site at 11:11 pm on April 29, which is being declared a success by China in the new era of space missions.

It should be noted that so far many small laboratories have been sent into orbit around the Earth, but the number of truly large space stations has been only 2: the former Soviet Union’s “Mir” and the US-led International Space Station. (ISS) Thus, China will be the third country to launch a single large space station into orbit around the earth.
The main module of the Chinese space station is named “Tianhe” and has a total length of 16.6 meters, a diameter of 4.2 meters and a weight of 22.5 tons at takeoff.

It is a key part of the future management and control of the space station, in which three astronauts will be able to stay longer for scientific research.

New technologies for the space station, such as the robot arm, will be tested and validated after Tianhe arrives in space.

If all goes according to plan, next month Chinese astronauts will be sent to the module, which will carry out a number of important activities outside of it.

According to the construction plan of the Chinese space station, between 2021 and 2022, 11 space flights will send other modules, necessary equipment and personnel of “Tiangong 3”.

After completing its orbit by 2022, the Chinese space station will be able to operate in fixed orbit for fifteen consecutive years.According to the American journal Scientific American, the Tiangong 3 will have 14 indoor cabinets for scientific experiments and 50 outdoor docking points for space exploration equipment. Will be able to attach.

The Chinese Space Research Organization has already selected about 100 experiments to be carried out in “Tiangong 3”, including nine international space research experiments.