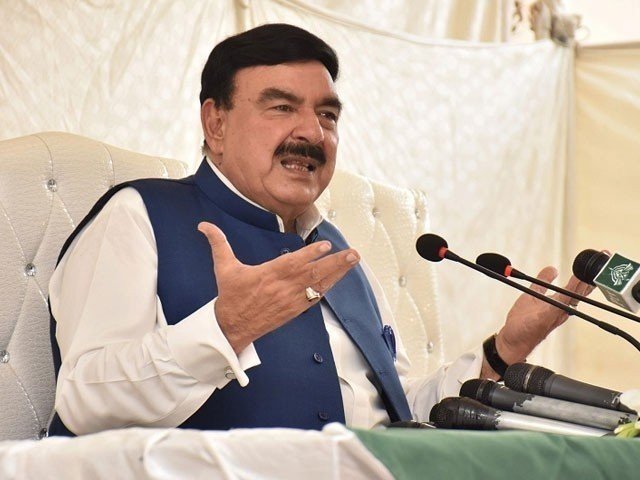 ISLAMABAD: Federal Minister Sheikh Rashid has said that his language will destroy the politics of Maryam Nawaz.

Addressing a press conference in Islamabad, Interior Minister Sheikh Rashid said that after the Azad Kashmir elections, I will announce the victory of PTI from outside Lal Haveli tomorrow evening. I doubt that PPP will win one seat more than PML-N. The opposition has already started crying. These people have already sworn not to accept defeat. If there is a fight between mother-in-law and daughter-in-law, they say I am going to De Chowk. Johnny Bilawal of my heart says I Coming to Kashmir, who can stop it, I ask the opposition to prepare for the next elections. Three years have passed and only one year is left.

Sheikh Rashid said that Nawaz Sharif and his family looted the country and punished the nation. If they wear branded clothes, then the poor have to wear torn clothes. According to social media, they are getting RAW agenda from Nawaz Sharif. If you change your turban from where you are Kashmiri, call yourself Kashmiri, do you have domicile there, I am 100% Kashmiri.
The Federal Minister said that Kashmiris will make their own decision, Pakistan is step by step Kashmiris struggle for independence, Maulana Fazlur Rehman’s performance on Kashmir issue was poor, the real work was done by Prime Minister Imran Khan and the same Kashmir case in the world. Will highlight,

Sheikh Rashid said that Shahbaz Sharif is scared of his brother, her language will destroy the politics of Maryam Nawaz, we have been accused of selling Kashmir, why is Nawaz Sharif wailing now, you announced your return in the morning I will give you charter flight, I will give you fool proof security, all the politics of Pakistan is imprisoned in the media, if you want to play on the media, I am the biggest leader

The Interior Minister further said that four to six months are important. India and Israel are waging a hybrid war. The daughter of the Afghan ambassador was not abducted or was missing. The drivers of four taxis were arrested and investigated. So how did the taxis change, the problems of Afghanistan are the problems of the Afghan nation, Pakistani army and Rangers are present on the borders to protect the country, Pakistan’s friendship with China is eternal, work on Dasu Dam will start soon.