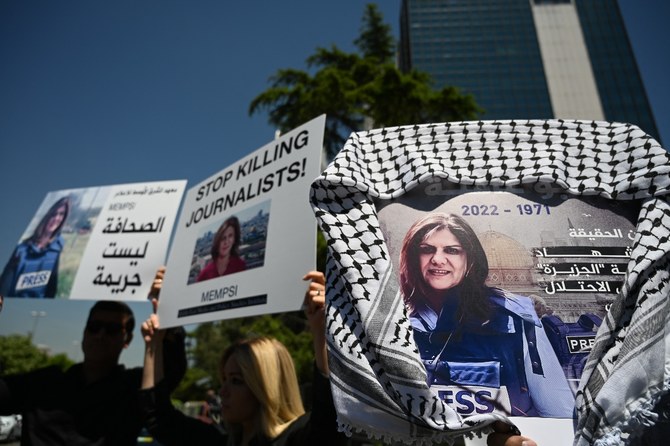 The Committee to Protect Journalists, Reporters without Borders and other media organizations joined forces in demanding a fair and swift investigation into the actions that led to Abu Akleh’s death.

“We are shocked and strongly condemn the killing of the prominent Palestinian-American journalist Shireen Abu Akleh in the West Bank while doing her job and while clearly identified as a journalist,” said CPJ’s Middle East and North Africa Program Coordinator Sherif Mansour. “We call for an immediate and thorough investigation into her killing. Journalists must be able to do their jobs safely and freely without being a target.”

Reporters without Borders’ secretary-general Christophe Deloire echoed those demands, stating: “RSF is not satisfied with Israeli foreign minister Yair Lapid’s proposal of a joint investigation into this journalist’s death, An independent international investigation must be launched as soon as possible.”

Meanwhile, describing Abu Akleh as a “trailblazer,” the Arab and Middle Eastern Journalists Association said in a statement that the organization mourns the loss of “one of the most renowned Palestinian voices in journalism.”

“AMEJA joins other organizations in demanding a transparent and independent investigation into the actions that led to Shireen’s death,” the statement read. “Video shows Shireen and her colleagues were wearing press vests and helmets and were clearly identifiable as journalists. Journalists should be able to do their jobs without the threat of grave harm. The perpetrators have to be held accountable.”

Abu Akleh, a prominent journalist for Al-Jazeera Arabic, was shot in the head on Wednesday while covering an Israeli army operation in the West Bank.

She was a veteran reporter on the Israeli-Palestinian conflict, and renowned across the Arab world as an authoritative voice on the region’s most contested issue.

Immediately following her death, Al-Jazeera issued a statement accusing the Israeli security forces of “deliberately” targeting Abu Akleh and of killing her “in cold blood.”

The Israeli authorities denied the allegations, saying in a statement: “At this stage, we cannot determine by whose fire she was harmed and we regret her death.”

Israeli Foreign Minister Yair Lapid said in a tweet that Israel was willing to conduct a joint investigation into her death with the Palestinians.