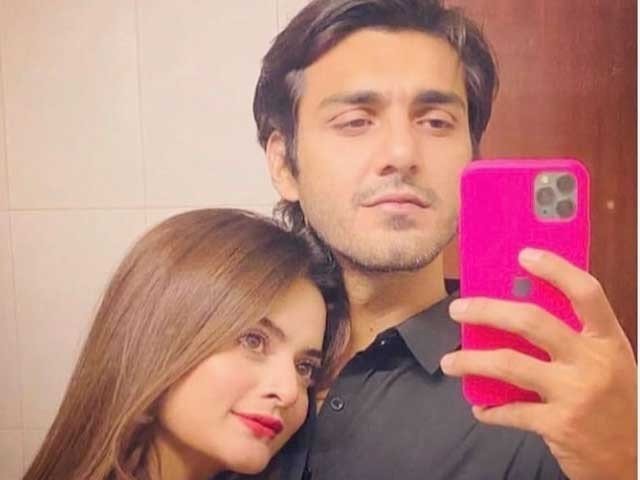 KARACHI: Actress Manal Khan’s video of her swimming with her fiance Ahsan Mohsin Ikram is going viral on social media, which has once again led to her being criticized by social media users.

Actress Manal Khan is becoming the second mine of Pakistan because every day she gets into some kind of controversy due to which she is subjected to severe criticism on social media.
After the drama serial “Jalan”, it seems that the controversy has taken hold of Manal Khan. Some time ago, a video of a photoshoot of her went viral in which she was lying on the seat in a very ugly manner. This was followed by several photos with her boyfriend Ahsan Mohsin Ikram (now fianc) which were widely criticized.

A few days ago, Manal Khan was criticized for wearing western style clothes in actor Ahsan Khan’s show and now the video of him swimming in the swimming pool with Ahsan Mohsin Ikram is going viral.
Yesterday, Ahsan Mohsin Ikram shared a short video on his Instagram account in which he and Manal Khan are swimming in the swimming pool. And as soon as I saw this video, it went viral on social media like a wildfire. Ahsan Mohsin stopped commenting to avoid critical comments but people on various social media platforms are expressing their views on the video.
People are comparing Manal Khan and Ahsan Mohsin Ikram for their closeness even before marriage. They are comparing the two sisters Ayman and Manal and people are saying that Manal Khan is becoming very vulgar while Ayman is very different from his sister. Is.

Many people criticized the video saying that it was left to watch while some people sarcastically said that this is the Islamic Republic of Pakistan.