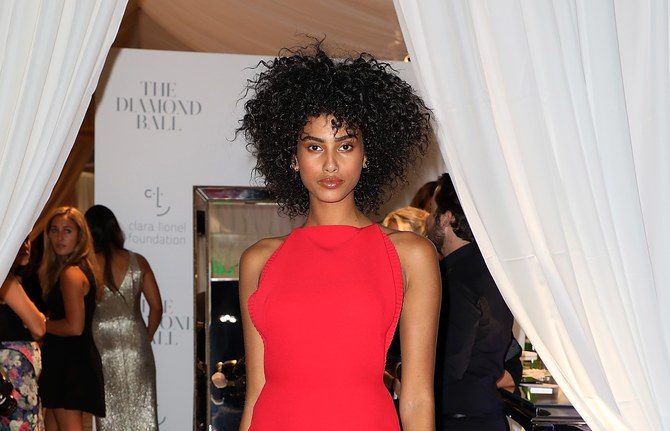 DUBAI: Moroccan-Egyptian-Dutch model Imaan Hammam treated her 1.4 million Instagram followers to a snapshot of life in Cairo this week, sharing carousel of images and videos of her time in the Egyptian capital.

The Netherlands-raised Hammam, who is a runway regular and has starred in campaigns for the likes of Versace and sports giant Reebok, seemed to enjoy her stay in Cairo, captioning her post “impeccable vibes.”

The model posted a photograph of record album covers, including the likes of Algerian icon Warda Al-Jazairia and legendary Egyptian singer Umm Kulthum.

She also shared snaps of daily life in the city — a meal at a streetside cafeteria, including what seemed to be the Egyptian staple molokheyya, a dish of stewed jute leaves — as well as shots of the nightlife and an artsy video of an elderly man with a shisha pipe.

The catwalk star, who was born to an Egyptian father and Moroccan mother in the Netherlands, has spoken about her heritage before, including her Egyptian roots.

She was one of three Vogue Italia cover stars for the magazine’s July 2019 issue that focused on themes of identity and genetics.

For her part, Hammam revealed some interesting results after taking a DNA test for the magazine.

“A dream come true! My first ever @vogueitalia cover and it’s a very, very special cover for me because it’s all about DNA. I’ve done my DNA test to find out more about my roots and heritage! Finding out that I am 70% Egyptian — which I kinda knew — and 10% Sudanese and 7.6% Senegambian and Guinean (sic),” Hammam posted on Instagram at the time, alongside a shot of her magazine cover.

“I’m only 22 (and) knowing where I come from will help me understand who I am,” the model told Vogue Italia, adding “Islam taught me that regardless the blood, we’re all sons of the world.”

Hammam is one of the most in-demand models in the industry. The now 25-year-old was scouted in Amsterdam’s Central Station before making her catwalk debut in 2013 by walking in Jean Paul Gaultier’s couture show.

Since then, she has appeared on the runway for major fashion houses, such as Fendi, Prada and Moschino, and in international campaigns for DKNY, Celine and Tiffany & Co.

Hammam also has been featured in leading fashion publications, such as Vogue and V magazine.