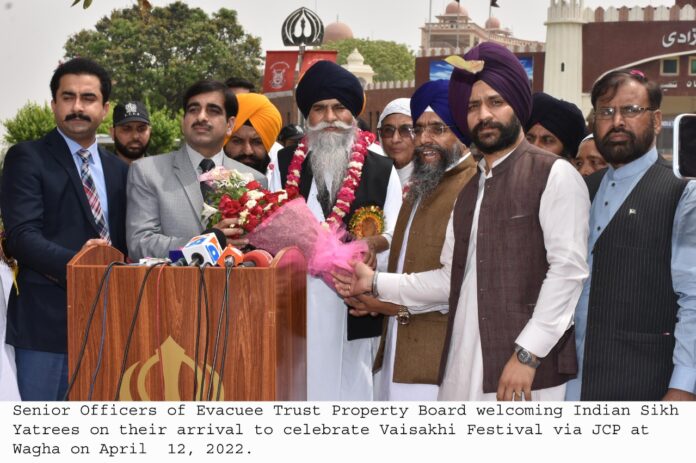 More than 2,000 Sikh pilgrims from India, led by party leader Sardar Arvinder Singh, reached Pakistan via Wagah border to attend the Sikh festival “Vasakhi Mela”, according to a press release issued by the Board of Spokesmen. According to Additional Secretary Shrines Rana Shahid welcomed the guests by presenting bouquets. On this occasion, Sardar Amir Singh, Deputy Secretary of Bandhak Committee at Pakistan Sikh Guru Dwara, Deputy Secretary Sharaniz Imran Gondal and other officers and Sikh leaders were also present. On arrival, the Sikh pilgrims expressed their happiness and said that they are very happy to see the land of their Guru. We are very grateful to the Government of Pakistan for issuing visas to the pilgrims. Talking to Wagah Barrier, Sardar Sukhbir Singh from Delhi Guru Dwara Management Committee said that both Pakistan and India are countries with a common culture. All the arrangements for the hospitality of the guests have been made in the best possible way and all other administrative facilities including accommodation, security, medical and travel facilities will be provided to the guests. According to Additional Secretary Shrines Imran Gondal, after reaching Lahore, the pilgrims left for Hassan Abdal by special train and coaches where the main function of Vasakhi Mela will be held on April 14 in which various political, religious and Sikh leaders will be present. After the main ceremonies, the pilgrims will reach Nankana Sahib on April 15. They will reach Farooqabad on April 16, Dera Sahib Lahore on April 17 and Rehri Sahib Aymanabad on April 19. After They will leave for India.

Share
Facebook
Twitter
Pinterest
WhatsApp
Previous articleThe signing ceremony of MoU between Lahore College for Women University and University of Jhang held today
Next articleEuropean experts say that if you want to keep your heart healthy and strong, make it a habit to drink plenty of water