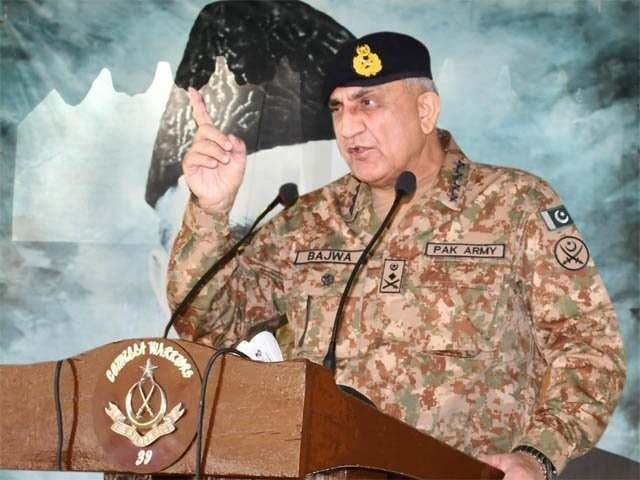 RAWALPINDI: Army Chief General Qamar Javed Bajwa has said that no one should consider our desire for peace as a weakness. Pakistan Armed Forces is always ready to face any kind of threat.

According to Pakistan Army Public Relations (ISPR), Army Chief General Qamar Javed Bajwa congratulated the cadets who graduated on the occasion of attending the 144th graduation ceremony of the Pakistan Air Force. Specially praising the role of Pakistan Air Force in the war against terrorism, he said that the manner in which the Air Force displayed its professionalism and capability during Operation Swift Retart is a testament to our determination and talent. He is proud of his Air Force and is confident that the Pakistan Air Force will reach the heights of great tradition in the future.

The Chief of Army Staff said that Pakistan is a peaceful country which has made many sacrifices for global and regional peace, we are committed to the principles of peaceful coexistence, it is time to extend the hand of peace at every level and direction. He said that Pakistan and India should resolve the issue of Jammu and Kashmir peacefully in accordance with the aspirations of the people there so that the human tragedy in Kashmir could end and this issue could be resolved once and for all.
Army Chief Qamar Javed Bajwa said that no one should consider our desire for peace as a weakness and we will not allow anyone to misinterpret our desire for peace, Pakistan Armed Forces to face any kind of threat. Are always ready for

The Chief of Army Staff also appreciated the presence of Saudi cadets in the academy on the occasion and said that it was a reflection of the excellent relations between Pakistan and Saudi Arabia, the two countries are bound by brotherhood and strong ties of Islam.