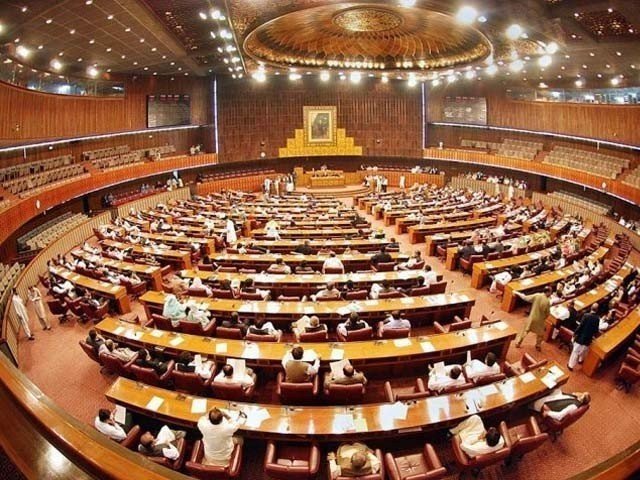 ISLAMABAD: During the National Assembly session, PPP’s Qadir Patel called Umar Ayub a looter, to which Umar Ayub Khan scoffed and said that he should find out how many parties Zulfiqar Ali Bhutto changed.

Submitting a written reply in the National Assembly session, energy and  Power Minister Omar Ayub Khan said that load shedding was not taking place in the country at present due to power shortage and sufficient power generation is available to meet the load demand.

Omar Ayub said that in order to improve the collection of dues and to prevent electricity theft, load management is being done by Discos on the basis of AT&C, not shutting down without the written permission of the concerned SDOs and Exxon. However, the shutdown is approved only after the approval of the competent authority SDO.
The energy minister said that acting lineman Mohammad Mubarez was killed and Mohammad Pervez was injured due to electric shock while replacing power poles in NA-183. SE Muzaffargarh changed the relevant action on 11 KV line. The danger from which the incident took place was not identified, disciplinary action has been taken against the perpetrators of negligence on the basis of investigation, and the affected employees have been compensated under the prevailing policy.

PPP leader Shazia Murree said that you should tell us why the breakdown took place on January 10. Don’t give us speeches, we have not come to listen to your speeches, this meeting is not taking place, it is an assembly, answer questions correctly, your incompetence. Due to 3 trillion revolving loans increased.

During Omar Ayub’s speech, the opposition chanted slogans of looting and once again whistles and desks were set up. Noise continued even during the questioning of the opposition members. PPP leader Qadir Patel said that there was such a looting here. Who was in PML-Q first, then joined PML-N and started calling PML-Q bad, now he is in PTI and calling PML-N bad, the biggest loot in this House Gives

Replying to a supplementary question from Qadir Patel, Omar Ayub said that he had a book in his house in which a word Zulfi was written which called Ayub Khan Daddy. He was the secretary general of his party but he was removed from the cabinet due to incompetence. He was expelled. Remember, Zulfi was in the cabinet of President Ayub Khan. He was expelled on the ground of incompetence. Let him know how many parties Zulfiqar Ali Bhutto changed.

During the meeting, PPP and PTI members got into a fight with each other. PPP’s Naveed Qamar and Agha Rafiullah also clashed with PTI’s Faheem Khan and Ataullah, while Agha Rafiullah pushed PTI. Member Ataullah fell, and PTI’s Faheem Khan and Naveed Qamar also clashed, during which PTI’s Amir Kayani entered the field, and security was called for when the situation deteriorated, but government and opposition members Bitter words continued to be exchanged between each other.

On the other hand, the Speaker of the National Assembly took notice of the commotion and quarrel in the House and decided to take action against the rioters. The Speaker sought footage of the cameras installed in the House