Need for awareness on asthma and cancer patients 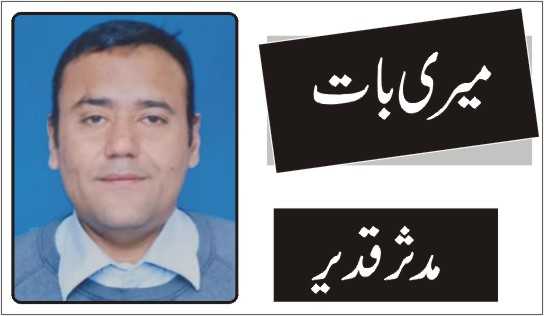 Sadiq, the milk seller, had asthma. I often saw him walking and taking deep breaths, and it seemed that his breathing would stop and he would fall unconscious. Sadiq was about 70 years old and he would open his shop after Fajr prayers because the hustle and bustle of inner city would start only after Fajr prayers. And if these people ever went on holiday like Christmas, all the streets would be untidy and there would be piles of dirt, which would make malaria and diarrhea common and there would be one patient in every house.
I used to think of shortness of breath as a disease of people over 60 years of age because many people around me got this disease in old age. And my father, the well-known journalist, poet Aminuddin Qadeer Shaidai, whose lungs were only 5% working in the last days of his life, also had difficulty breathing. He did not have asthma, but because his lungs He had stopped working due to smoking. He had a heart attack while undergoing treatment in the pulmonology ward of Services Hospital which proved fatal. Doctors tried to restore his heartbeat with the help of machine but he was gone.
Asthma is a disease that is difficult to breathe, but it can also be caused by the lungs shrinking and not working, which needs to be treated. I used to think of old age as a disease. Later I found it in my health reporting in my age and also in children who are 14% suffering from this disease. The severity of this disease was also noticed by WHO after 2016 while Awareness about this has been going on since 1998 when the Global Initiative for Asthma (GINA) announced to celebrate this day for which May 3 has been chosen. Every year this day is celebrated under different theories. It is being celebrated with determination to bring awareness and state-of-the-art care for asthma patients all over the world. Honey is a respiratory disease caused by disorders of the respiratory tract and lungs. Asthma sufferers experience symptoms such as difficulty breathing, coughing, shortness of breath, chest pain, restlessness in sleep, and fatigue. Asthma can have many causes, including allergies, smoking, climate change and respiratory tract infections. There is no definitive cure for asthma but there are medications and treatments that can be used to prevent the disease and reduce the patient’s discomfort.
Millions of people around the world suffer from asthma, which means that most people know someone who suffers from it. People who have asthma in their life are usually familiar with the ‘psst psst’ sound of the inhaler which makes the relatively normal daily life possible for those who use them.
As of 2016, the World Health Organization (WHO) has recognized asthma as a major public health issue. The WHO estimates that approximately 340 million people worldwide suffer from asthma and the cause of this lung disease More than 400,000 deaths have been reported since. Asthma is found incredibly in places that are affected by low air quality and, incidentally, such areas are also often inhabited by low-income groups such as the inner city. The life of these already backward people is usually the most affected by this dangerous disease. An additional factor is psychological stress, which is more prevalent among people living on the brink of poverty, increasing their presence there.
After the asthma awareness, I would also like to mention an incident that took place yesterday when cancer patients protested on the metro track and closed it, on which the Punjab government now needs to work and especially Khawaja Salman. I would request Rafiq and Khawaja Imran Nazir to play their role in this regard and take the prayers of helpless patients. A large number of cancer patients in Pakistan belong to the poor and these patients are suffering from different types of cancer. Women and even 18- to 19-year-old girls are being affected by the disease. Full attention is being paid to the prevention of cancer all over the world. Dialogues are being conducted and awareness campaigns are also being run through the media while wealthy individuals and NGOs donate for the patients but the efforts being made in Pakistan for eradication of the disease and treatment of the patients are extremely. Insufficient. Expensive medicines for cancer patients were being provided free of cost from Bait-ul-Mal and Zakat funds from government hospitals in Punjab. Therefore, instead of stopping free medicines, there is a need to take other ways to save funds and to avoid making poor cancer patients a training ground.

Share
Facebook
Twitter
Pinterest
WhatsApp
Previous articleNursing is the backbone of the health profession,Prof. Dr. Muhammad Farooq Afzal
Next articleA ceremony was held at Mayo Hospital on the occasion of the birthday of Florence Nightingale