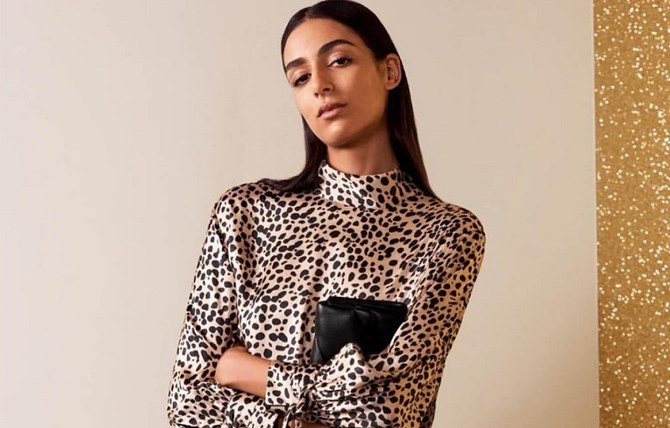 DUBAI: The holidays are quickly approaching, and the fashion world is preparing for a season in style as luxury brands team up with the industry’s favorite faces to showcase their latest fall 2021 collections via eye-catching campaigns.

The latest is German label Boss, which has recently unveiled its holiday campaign starring none other than Moroccan-British model Nora Attal.

The 21-year-old appears in the advertorial wearing a leopard print ensemble and clutching a black leather bag from the brand’s newest collection.

The “Thor” star is seen wrapping gifts in front of a conveyor belt while posing in a black tuxedo.

The holiday advertorial celebrates the joy of togetherness and the special moments of exchanging gifts.

The collection boasts a wide range of holiday styles from sportswear essentials and pajama-style suits to tuxedos and sequin dresses. Sneakers, scarves and knit beanies are among the other items that jostle for attention in the label’s festive collection.

The 25-year-old stars in the advertorial, photographed by Sean Thomas at the TWA Hotel at JFK Airport, alongside beauty influencer Bretman Rock, US it girl Lori Harvey and actress Tina Leung.

The campaign captures the jet-set chic and easy glamour of Bella — who is a brand ambassador — and friends as they journey to New York City to spend the holidays and ring in the New Year together.

Hammam appeared in the advertorial titled “Mad for Plaid,” wearing a red plaid pajama set and photographed by Zoey Grossman.