Novak Djokovic to be kicked out of Australia in HOURS: Anti-vax world tennis No1 has his visa cancelled over vaccine exemption row 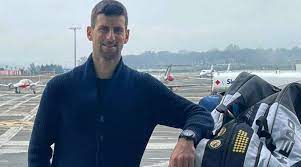 Novak Djokovic will likely be deported from Australia after his visa was rejected by officials amid a mix-up with his application.

The world No. 1 tennis star, who was detained at Melbourne‘s Tullamarine airport overnight, has been denied entry into Australia after initially saying he had been granted a medical exemption from the country’s Covid-19 vaccination requirements so that he could play in the Australian Open.

The 34-year-old was issued a letter by the Australian government saying his visa had been denied and he would be deported, a source close to the tournament said tonight.

Djokovic has now been moved to a hotel in Carlton in Melbourne’s inner-city under police guard as authorities arrange a deportation flight.

His lawyers launched a case at Melbourne’s Federal Court during Thursday afternoon local time (the early hours of Thursday in the UK). It was adjourned until 6pm local time (7am GMT) but is likely to proceed today.

The ABC reported one of the issues discussed is whether Djokovic has access to a tennis court while in detention, raising questions about how long he might be willing to wait for the case to be resolved.

The Serb flew in on an Emirates flight from Dubai, and a return flight with the airline departs Melbourne at 10.30pm local time (11.30am GMT).

Australia’s Health Minister Greg Hunt earlier confirmed that Djokovic’s visa had been cancelled, and Border Force issued a statement to that effect.

‘The Australian Border Force will continue to ensure that those who arrive at our border comply with our laws and entry requirements,’ a statement read.

‘The ABF can confirm that Mr Djokovic failed to provide appropriate evidence to meet the entry requirements to Australia, and his visa has been subsequently cancelled.

‘Non-citizens who do not hold a valid visa on entry or who have had their visa cancelled will be detained and removed from Australia. The ABF can confirm Mr Djokovic had access to his phone.​’

And Prime Minister Scott Morrison tweeted: ‘Mr Djokovic’s visa has been cancelled. Rules are rules, especially when it comes to our borders. No one is above these rules. Our strong border policies have been critical to Australia having one of the lowest death rates in the world from COVID, we are continuing to be vigilant.’

Meanwhile, Serbian President Aleksanda Vucic said on Instagram that he has spoken to Djokovic and added that Serbian authorities are taking measures ‘so the harassment of the best tennis player in the world be stopped in the shortest possible time.’

Djokovic, who landed in Melbourne on his Emirates flight from Dubai at around 11.15pm local time on Wednesday (10.15am GMT), was initially placed in isolation after officials discovered his team had bungled his visa application to play in the Australian Open without being vaccinated.

It came just hours after Prime Minister Morrison threatened to send the Serb back ‘on the next plane home’ if he could not provide evidence for his vaccine exemption.

The 34-year-old was snagged at customs after a member of his team made a critical mistake in requesting a sub-class of visa that does not apply to tennis players, sources told The Sydney Morning Herald .

Yesterday the tennis star’s father Srdjan Djokovic issued an urgent statement to the Australian government, calling on them to free his son who has been ‘held captive for five hours’, adding it was ‘a fight for the whole word!’

He said: ‘I have no idea what’s going on, they’re holding my son captive for five hours.

Srdjan told a Serbian radio station his son was being kept isolated in a room without access to his support staff or a mobile phone.

‘Novak is currently in a room which no one can enter. In front of the room are two policemen,’ he told the B92 internet portal.

Prime Minister Scott Morrison has warned Djokovic ‘won’t be treated any different to anyone else’ and will be banned from entering the country if evidence of his medical exemption from the Covid-19 vaccine is deemed ‘insufficient’.

Border Force contacted the Victoria government earlier on Wednesday after finding that the tennis star’s team had submitted a visa which does not allow medical exemptions for being unvaccinated.

This kind of work visa would need the support of the Victorian government for approval, but they reportedly refused when asked by border agents, saying that visa applications were a matter for Morrison’s government.

Other previous visa disputes such as his have seen travellers detained at the airport before being sent on a flight back to their country of origin.

While Djokovic had been granted a medical exemption from a Covid jab by two independent health panels, approval for the visa is a separate process.

It is still unclear why Djokovic flew to Australia expecting to be allowed into the country when the visa he had submitted does allow medical exemptions for being unvaccinated or if he had privately been told his application would be approved.

The tennis star’s announcement that he had received a medical exemption to play provoked outrage in Melbourne, which has endured the world’s longest cumulative lockdown and where an outbreak of the Omicron variant has sent case numbers to record levels.

Australians, many of whom have been separated from loved ones overseas for months, reacted with fury over news Djokovic had been granted exemption.

It was seen as an even more bitter pill to swallow due to the 34-year-old’s views, including saying that he is ‘opposed to vaccination’ in April 2020.

In November, he lashed out at the media for attacking his vaccination status, saying ‘propaganda is spread that suits the elite or a certain group of people.’

But Australian PM Morrison told a press conference on Wednesday: ‘There should be no special rules for Novak Djokovic at all. None whatsoever… We await his presentation and what evidence he provides us to support that.’

Tennis Australia and Victoria state had earlier said Djokovic was one of a ‘handful’ of successful applicants among 26 people who sought exemptions from being vaccinated, but had not received any special treatment in the application process.

The decision sparked sharp criticism in Australia, where more than 90 per cent of over-16s are doubled jabbed, with fans threatening to boycott the annual tournament over the perceived special treatment of the nine-times champion.

‘My view is that any individual seeking to enter Australia must comply with our border requirements,’ Mr Morrison told reporters at a press conference yesterday.

‘Now Novak Djokovic, when he arrives in Australia, he has to if he’s not vaccinated, must provide acceptable proof that he cannot be vaccinated for medical reasons to be able to access the same travel arrangements as fully vaccinated travellers.

‘So we await his presentation and what evidence he provides us to support that. If that evidence is insufficient, then he will be treated no different to anyone else and he’ll be on the next plane home.’

The grounds for Djokovic’s exemption under the ATAGI guidelines have remained private but the tennis star faces growing calls to personally explain how he got approval to enter Australia to contest the tournament without showing his vaccination status.

The Serbian, who has declined to reveal his vaccination status, said previously that he was unsure whether he would compete at the January 17-30 tournament in Melbourne due to concerns over Australia’s quarantine rules.

The state of usually Victoria does not allow unvaccinated people to enter unless they go through a mandatory 14-day hotel quarantine, but on Tuesday the Serbian tennis star announced on social media he was flying to Melbourne after securing a medical exemption.

In a tweet Djokovic wrote: ‘Happy New Year! Wishing you all health, love & joy in every moment & may you feel love & respect towards all beings on this wonderful planet.

‘I’ve spent fantastic quality time with loved ones over break & today I’m heading Down Under with an exemption permission. Let’s go 2022.’

Yesterday furious fans took to social media to voice the anger over Djokovic’s medical exemption, with many threatening to boycott the tournament next month in response.

One user wrote: ‘For the first time in decades I will not be watching the tennis. Novak Djokovic should not be given an exemption.

While another commented: ‘So vaccinated Australians weren’t allowed to cross state borders to see their dying loved ones but Novak Djokovic is allowed to come here (possibly unvaccinated) from overseas to hit a tennis ball. Unbelievable.’

Another person added: ‘After everything that Victorians have been through, Novak Djokovic getting a vaccine exemption is nothing short of a kick in the guts. All those lockdowns, all that suffering. Seriously?’

Elsewhere another person said: ‘Watching the Australian Open every January is my favourite sports viewing.

‘The decision to allow Novak Djokovic to participate when he’s unvaccinated means I must boycott your telecast this year. Utterly appalled by this.’

The move also outraged many Australians, who have been told they cannot re-enter their own country unless they’re fully vaccinated or face two weeks in strict hotel quarantine, with many already expressing their fury online.

It is usually anonymous but it is understood Djokovic’s waived his right to anonymity.

All applications were assessed to ensure any exemptions met conditions set out by the Australian Technical Advisory Group on Immunisation (ATAGI).

Currently vaccination exemptions are only handed out in Australia to people who have had anaphylaxis after a previous vaccine or an ingredient in the provided jabs.

People who are immunocompromised can also receive an exemption in some circumstances.

‘We completely understand and empathise with … people being upset about the fact that Novak has come in because of his statements over the past couple of years around vaccination,’ Tiley told reporters.

‘However it is ultimately up to him to discuss with the public his condition, if he chooses to do that, and the reasons why he received an exemption.’

Melbourne had the world’s longest cumulative lockdown to contain Covid, and an outbreak of the Omicron variant has sent case numbers to record levels.

‘I think lots of people in the Victorian community will find this to be a disappointing outcome,’ acting Victorian Sports Minister Jaala Pulford told a media conference earlier on Wednesday after news of Djokovic’s exemption.

Share
Facebook
Twitter
Pinterest
WhatsApp
Previous articleThere is no emergency facility in any government hospital except Punjab Institute of Cardiology,Dr. Salman Kazmi
Next articleKeeping up with the lovers! Kim Kardashian puts on busty show alongside beaming Pete Davidson