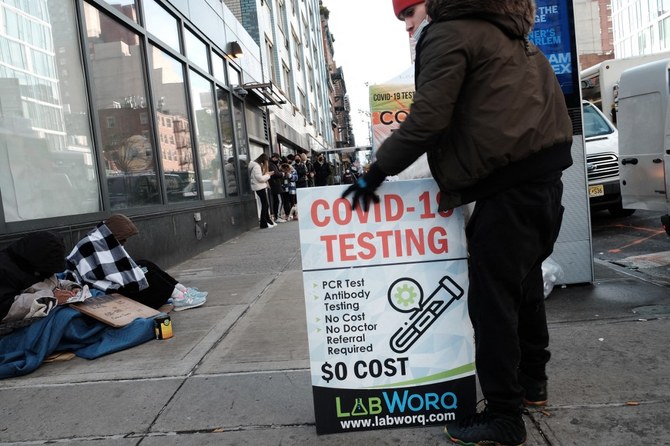 A recent visit to London revealed how the city has become the center of COVID-19 in the UK, yet is still reluctant to adopt stricter measures to combat the rapid spread of the new omicron variant. Over the holidays (Dec. 21 to Jan. 3), Europe recorded millions of new cases and thousands of deaths, prompting many European countries to tighten their defenses against the disease, including severe travel restrictions. Germany and France, the EU’s two largest countries, banned travel to and from the UK. Scotland, Wales and Northern Ireland also adopted stronger guidelines to limit the spread of the virus.

However, England, the UK’s largest region (or “country”) and London, its most populous city, have remained aloof. During the holidays, England reported about 1.7 million cases and nearly 1,500 deaths from COVID-19. Officials have ruled out, for the time being, any new measures comparable to those adopted by other European countries or other parts of the UK. On Monday, Prime Minister Boris Johnson said new measures were not yet needed to fight the omicron variant: “The way forward for the country as a whole is to continue with the path that we are on.” He added: “Of course we will keep all measures under review, but the mixture of things that we are doing at the moment is I think the right one.”

There appears to be something in London’s DNA that makes it want to defy the odds and one hopes that it will emerge victorious over the pandemic. The city may be suffering battle fatigue as a result of the on-off rounds of onerous COVID-19-related restrictions of the past two years.

A sense of fatalism appeared to have set in. Pubs and restaurants were overflowing and the wearing of masks appeared to be optional. Coming from the Gulf, where restrictions are in place and meticulously enforced, I was taken aback. I was initially impressed by the travel requirements, which included a pre-travel PCR test, another within two days of arrival and a third after eight days. Travelers to the UK had to book a test appointment in advance and present that booking at the airport. However, because testing capacity was stretched to the limit, costs rose dramatically to about £300 ($405) a pop. The rising cost and limited capacity at reputable centers provided an opportunity for less reliable tests.

Similarly, there was a requirement that those attending meetings should take an antigen test every day. The test kits were provided for free and self-administered, but these too were subject to misuse. The loopholes may have contributed to a false sense of security before the latest variant stormed into the city.

London has a long history of fighting disease, but not always successfully. There have always been epidemics and waves of death within the city, according to historian Peter Ackroyd. “London is a city perpetually doomed,” he wrote in his massive book “London: The Biography.” The Black Death of 1348 killed about 40 percent of its population. This was followed by at least seven severe attacks of the plague between 1563 and 1666, when the Great Plague ravaged the city.

As long as there are billions of unvaccinated people around the world, the pandemic will persist

Daniel Defoe, the author of Robinson Crusoe, who was very knowledgeable about London, described how the city was torn by both fever and nervous fear during the Great Plague, “quite abandoned to despair,” he said. Public assemblies were banned, people confined to their houses, some physically shuttered in and, in the streets, genuine madness.

Scottish writer James Boswell lamented, upon his arrival in the city in 1762, “I began to be apprehensive that I was taking a nervous fever, a supposition not improbable, as I had one after such an illness when I was last in London. I was quite sunk.”

Between June 1918 and April 1919, the city was struck by three separate waves of the Spanish flu, killing more than 18,000 Londoners out of a total of 228,000 fatalities in the UK. The virus disproportionately targeted young adults.

On Christmas Eve last year, official data showed a record 122,186 new COVID-19 cases in the UK, up from 119,789 a day earlier and marking a third day of cases in excess of 100,000. By Christmas, about 148,000 deaths had been recorded in the country since the start of the pandemic — the highest toll in Europe.

In London itself, 26,142 cases and 25 deaths were reported across all boroughs on Christmas Eve, more than 20 percent of the UK total. Health experts estimated that about 10 percent of Londoners had been infected. Since then, the numbers have risen dramatically, as omicron ripped through London during the holidays. Dozens of countries barred travel to and from the UK, other than urgent humanitarian cases.

The UK appears destined to remain a COVID-19 focal point, at least for a while. It remains to be seen whether its gamble of relying on immunity brought about by rising vaccination rates will work in the medium and long terms.

However, as long as there are billions of unvaccinated people around the world, the pandemic will persist and the virus will keep mutating, triggering one health crisis after another. London is no exception. Indeed, it is a magnet for travelers from all around the world who will inevitably bring those mutations with them.

According to the New York Times COVID-19 vaccination tracker, about 51 percent of the world’s population is “fully vaccinated,” i.e., has received at least two doses. However, vaccination rates are not even. Scores of countries are still below 10 percent and many below 2 percent. In the UK, Europe and elsewhere, there are vocal minorities who are actively opposing vaccines and COVID-19-related restrictions, therefore frustrating official efforts to contain its spread.