Opposition Leader in Senate will be from PMLN,Maryam 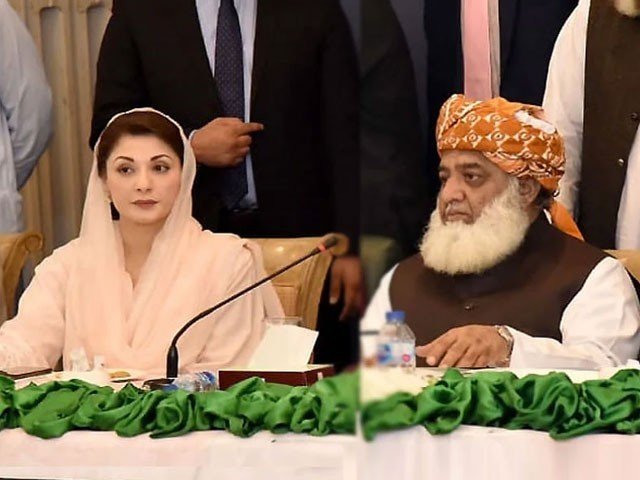 LAHORE: Pakistan Muslim League-Nawaz (PML-N) Vice President Maryam Nawaz has said that it has been decided in principle that the Leader of the Opposition in the Senate will be from PML-N, and in principle all parties will abide by this decision.

Addressing a joint press conference in Jati Amira, PDM chief Maulana Fazlur Rehman said that inflation has broken the backs of the people, the government has left nothing to the people, the people have not recovered yet and a mountain of inflation Has been brought down, recently electricity prices have been increased, SBP is being made a subsidiary of international institutions, where do these people want to take the country, government measures have become a threat to national defense, we of Pakistan Stand with freedom and autonomy.

The head of PDM said that NAB is a puppet organization, NAB has summoned Maryam Nawaz on March 26, this summons proved our position, the reasons given by the league leader for NAB summons were given by NAB. Has been exposed. Is the NAB designed to serve and interpret agencies? PDM workers and leaders will be present on the occasion of Maryam Nawaz’s appearance.
Maulana Fazlur Rehman said that PDM is united and its 9 parties are united on one thought, trying to resolve issues through mutual contacts, will wait for the decision of PPP CEC, will tell them that they 9 Consider the decision of the parties, effectively improve matters with them and are ready to consider further their arguments.

Maryam Nawaz said that Imran Khan’s incompetence has engulfed the entire country, his future is tied to his own performance, PDM will not allow the government to come out of the narrow alley at any point. ۔

The PML-N leader said that efforts are being made to keep all the parties in the PDM united. The PPP has its own decision on whether to stay with the PDM or not. All the parties were supporting Yousuf Raza Gilani in the Senate elections, and now It has been decided in principle that the Leader of the Opposition in the Senate will be from the PML-N. In this regard, we have also talked to Maulana Fazlur Rehman. Under the rule, all parties will abide by this decision. no.

The meeting also considered the no-confidence motion against Prime Minister Imran Khan, and agreed to take full advantage of the fact that public opinion is against the government. While the PML-N leadership suggested to the PDM chief that a long march be held after Eid-ul-Fitr.

Maulana Fazlur Rehman said that the alliance of PDM will not be allowed to be sabotaged under any circumstances.