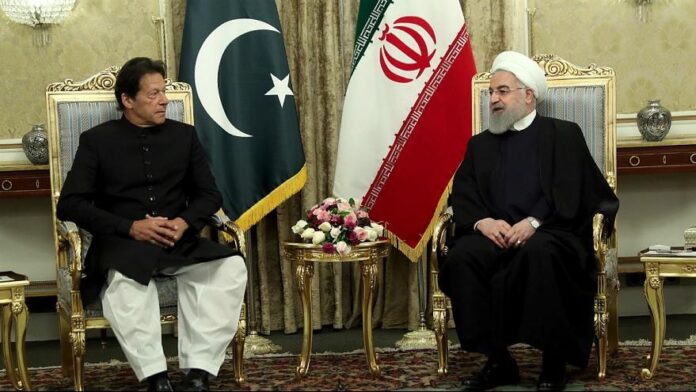 Nowadays Iranian foreign minister Javad Zarif is in Pakistan and has met Pm Imran Khan, Army chief General Qmar Javed Bajwa and foreign minister Shah Mehmood Qureshi. During all these high level meetings important matters like terrorism, regional peace, trade and other bilateral issues has been discussed in detail. Javad Zarif appreciated Pakistan’s role to maintain peace in the region. Although there are few clashes at Pak Iran border and as a result there was disturbance between two strong Islamic countries of the world. Pakistan and Iran had long border line. The 900 km border begins at the Koh-i-Malik Salih Mountain and ends at Gwadar Bay in the Gulf of Oman. It passes through a diverse landscape of mountain ridges, seasonal streams and rivers, and is notorious for human trafficking, smuggling and cross-border militancy. Pakistan started fencing certain areas of the border in May last year, which Iran is against. Here it is necessary to recall that Pakistan’s Economic Coordination Committee (ECC) approved 3 billion rupees ($18.6 million) in additional funds for the fencing of its border with Iran in April last year. Meanwhile, Pakistan has opened five crossings on the border to allow cargo trucks to cross over to Balochistan, Foreign Office spokeswoman, Aisha Farooqui, confirmed on Tuesday, adding that no individual movement was permitted.
“All five border points are open for cargo only. Pedestrians can come only through Taftan,” Farooqui told Arab News, referring to another crossing on the 900 km Pakistani-Iranian border in Balochistan province.
Pakistan sealed the border on Feb. 24 after Tehran confirmed coronavirus-related deaths. Pakistani people who were in Iran at the time of coronavirus, they face lot of problems. There are number of stories of violence and robbery with Pakistanis. They reached at Taftan border crossing area so helplessly. Pakistan can forget it for the time being. Bothe countries have long history of zig zaging relations. At certain occasion, world looked much escalated relations between these two countries. Pakistan and Iran are important countries of the region. Iran has strong favour in Afghanistan too.

The killing of Qasim Soleimani at the beginning of 2020 created uncertainty over Iran’s role not only in the Middle East, but in South Asia as well. As the head of the Quds Force of the Iranian Revolution Guard Corps (IRGC) — the unit responsible for external military and covert operations — Soleimani extensively increased Iran’s sphere of influence in the region.

Pakistan, for its part, expressed “deep concern” over potential rising U.S.-Iran tensions in the aftermath of Soleimani’s killing. Pakistan’s concern is understandable. As Foreign Minister Shah Mehmood Qureshi stated, geography inexorably links Pakistan’s security with stability in the Middle East. This is particularly the case in relation to Iran, due to the nearly 600 mile border shared with Iran along Pakistan’s Balochistan province. With turbulent Iran-Pakistan strategic relations over the latter’s increasing tilt toward Saudi Arabia, the Balochistan border has also been a site of conflict, with each side lambasting the other for providing sanctuaries to militant groups in their respective provinces.

Despite their common cultural heritage, Pakistan and Iran have had different aims in the region. In the mid-1990s, Iran supported the Northern Alliance, a confederation of ethnic Uzbek, Tajik, and other groups in Afghanistan, while Pakistan backed the Taliban, led by tribal chief Mullah Omar. Furthermore, Iran’s close ties with India, including its economic links with New Delhi and joint infrastructure projects, have always hampered efforts to deepen relations with Islamabad

By keeping all these facts and ground realities in mind we can say that Jawad Zarif’s visit to Pakistan is much important because now the circumstances in Afghanistan and at border line with Iran are normal. Until now there is nothing, so both the countries can develop their relationship in all fields which is also the need of the time.