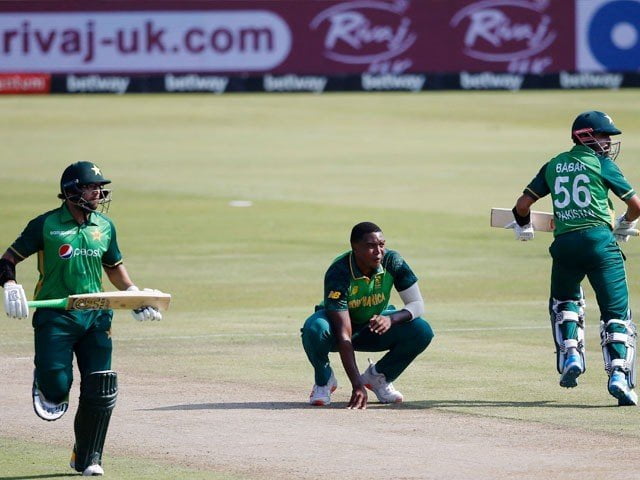 In the first ODI between Pakistan and South Africa played at Centurion, South Africa scored 273 runs for the loss of 6 wickets in the stipulated overs in response to which the national team achieved the target at a loss of 7 wickets on the last ball.

Fakhar zaman and Imam-ul-Haq started the innings but Fakhruzzaman proved to be the guest of only 8 runs after which captain Babar Azam formed a crucial partnership of 177 runs for the third wicket with Imam-ul-Haq during which Imam-ul-Haq completed half a century. He was dismissed after scoring 70 runs.
Captain Babar Azam once again played a brilliant innings showing responsibility, he was dismissed for 103 off 104 balls with 17 fours. Danish Aziz’s debut was disappointing as he fell victim to Enrique by scoring only 3 runs while Asif Ali was also the guest of only 2 runs.

Earlier, Pakistan won the toss and elected to field first. Aiden Markram and Quentin de Cock started the innings for South Africa but Shaheen Shah Afridi sent both the players back to the pavilion soon. Markram was dismissed for 19 and D Cock for 20.

South Africa captains Temba Bauma and Henrik Klaassen were the only guests for one run. David Miller and Rossi vendor Dawson solidified the team’s scoreboard with a crucial 116-run stand for the fifth wicket. David Miller fell victim to Harris Rauf after scoring a half-century, but Rossi vendor Dawson played a responsible innings to score his first century of his ODI career and remained unbeaten on 123 runs.