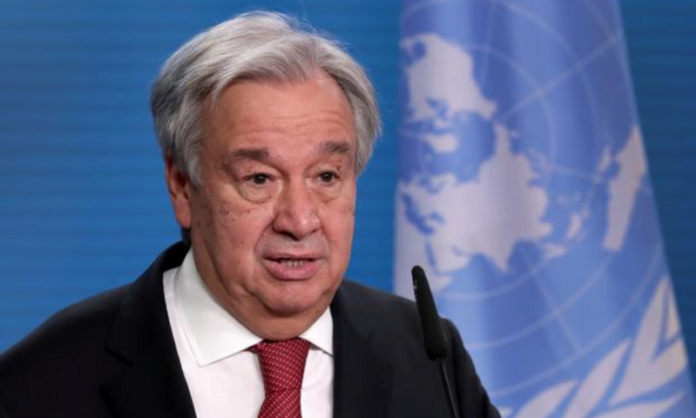 UNITED NATIONS: UN Secretary-General Antonio Guterres has urged Pakistan and India to “come together and seriously discuss their problems”, reminding the two nuclear-armed countries that any military confrontation between them would be “a disaster of unmitigated proportions”.

At his first news briefing of 2021 in New York on Thursday, the UN chief also emphasised the need to “fully respect” human rights in the India-occupied regions of Jammu and Kashmir.

“Now, things have not moved in the right direction. Our good offices are always available, and we will insist within it on finding peaceful solutions for problems that have no military solution.

“It is clear, when seeing Pakistan and India, any military confrontation between the two would be a disaster of unmitigated proportions for both countries and for the whole world,” he warned.

Tensions between Pakistan and India have been high since August 2019 when India illegally merged the occupied territory with the union.

Pakistan responded by downgrading its diplomatic relations with India and expelled the Indian high commissioner. India, however, continues to insist that the merger is its “internal matter”.

It was also pointed out at the briefing that since August 2019, tensions in the region have been at an all-time high. And India has been committing serious human rights abuses in the occupied lands while violations of the Line of Control (LoC) in Kashmir have also continued.

“Well, what I said in the statement you mentioned is, unfortunately, the same that I can say today. I mean, I do believe that it is absolutely essential to have a de-escalation of the situation, namely in the Line of [Control],” said the UN chief while reviewing the situation in the disputed region.

“I think it’s absolutely essential for the two countries to be able to come together and seriously discuss their problems, and I think it’s essential that human rights are fully respected in all territories that you mentioned,” he said.

The international media, while reporting the secretary-general’s statement, noted that this was not the first time he had insisted on a resolution to the dispute based on the UN Charter and resolutions. He stressed the same during his four-day visit to Pakistan last year to attend an international conference on Afghan refugees.

“We have taken a position about the need for Security Council’s resolutions to be implemented for effective de-escalation. Another important aspect, which needs full respect of human rights and continental freedom in Jammu & Kashmir, is that people should have free movement as [they have] in Pakistan’s side,” Mr Guterres said in a previous statement.

He hoped that “this (free movement) will also be achieved on the other side (India). I have offered my good offices in relation to the situation and our position is that the Security Council’s resolutions be implemented.”

In a reference to India’s revocation of Article 370 and ending occupied Kashmir’s special status, Mr Guterres urged India “to refrain from taking steps that could affect the status of Jammu and Kashmir”.

In another statement, he said that the UN position on this region was “governed by the Charter of the UN and applicable Security Council resolutions […] The final status of Jammu and Kashmir is to be settled by peaceful means, in accordance with the Charter of the UN.”