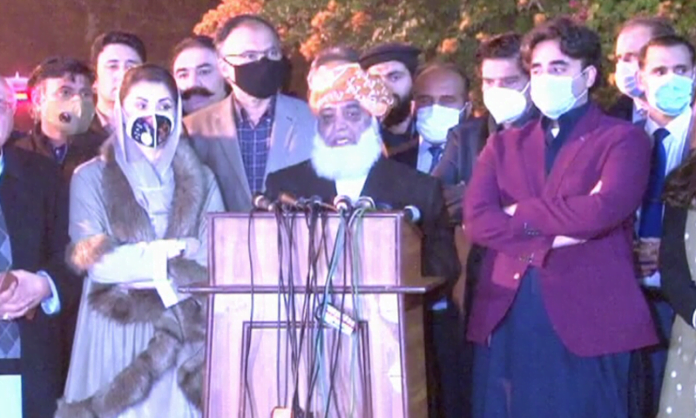 The cat has come out of the bag. The PDM has finally announced a long march against the government’s time. The March has been named as the Inflation March and it will start on March 26 after a long meeting. According to the announcement, caravans from all over the country will leave for Islamabad on March 26.

After the meeting, Maulana Fazlur Rehman formally announced the inflation march while other leaders including Maryam Nawaz and Bilawal were also with him.

Maulana further said that he had never declared a field in Rawalpindi but had named Islamabad and Rawalpindi. On the other hand, on the question of resignations, Maryam Nawaz advised to encourage the journalists.

It should be noted that the PDM had hinted at a long march on December 13, 2012 at the end of January or the beginning of February and also spoke of resigning on various occasions.

But December, January passed and February also started, but neither the PDM resigned nor the long march was announced, so government spokespersons and leaders sharply criticized the opposition parties. Murad Saeed In the National Assembly, the opposition was awarded titles such as modesty, shame and slaves.
All this is in place, but turning the long march into an inflation march is a clear indication that the opposition parties have laid their hands on the aching vein of the inflation-stricken people. There is a rumor everywhere that the government is failing miserably to control inflation

While in response to this, instead of trying to control inflation, the government is raising the slogan of corruption and NRO. The country has been looted, money has been transferred to other countries through money laundering. And the government also takes the position that the purpose of all this noise, shouting, marching and resignations is to avoid corruption in the past and to get NRO in one way or another. Prime Minister Imran Khan I announce that I will not get NRO.

There is weight in the words of both the government and the opposition. The facts show that in the past the national treasury was looted with both hands and the money was transferred to the bank accounts of different countries of the world. On the other hand, the opposition says that inflation is rampant in the country, the mafia is not under the control of the government and there is no such thing as good governance. There is no exaggeration in them either … because the people are watching all this

Now, keeping these facts in mind, many questions arise – will the PDM’s inflation march be successful or not? Will opposition parties be able to mobilize the people or not? Will the people respond to the call of the opposition? At the same time, it remains to be seen what strategy the government will adopt to thwart the inflation march.
Whether the march is successful or not, the circus will start. The opposition will try to turn the people against the government, because that is what they are saving. At the moment, the opposition, especially the PML-N and the PPP, is having a hard time holding them accountable. It is up to the people to decide whether to fall into the trap of the opposition on the slogan of inflation or not.