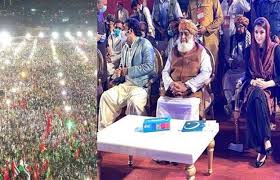 The movement against the government of the time is going on in the country, the second show of which was held at Jinnah Bagh in Karachi. Opposition leaders responded to the allegations of Prime Minister Imran Khan in their address to the convention of Tigers Force yesterday. Maryam Nawaz refused to accept Imran Khan as the Prime Minister and said that she has no regrets about becoming a grandmother. She is the grandmother of one or two children and knows the sanctity of relationships very well but the pressure of the meeting before Khan Sahib was not tolerated. The one who staged a sit-in for 126 days and criticized everyone severely could not bear the pressure of a single meeting and resorted to threats. Along with Maryam Nawaz, Bilawal Bhutto also harshly criticized and said that incompetent and incompetent ruler has to go. The fight is decisive. He said that Prime Minister Imran Khan gets the news of inflation from TV. Our fight is not for power, we are fighting the case of the poor people under the burden of inflation, we have defended the democracy of this country with our blood. Similarly, Maulana Fazlur Rehman also lashed out at the critics and said that the rigged government was forced to accept. But we are not ready to accept this puppet government. He criticized Prime Minister Imran Khan and said that he was killed in his speech. He mentioned the call made by Khawaja Asif to General Qamar Javed Bajwa and told the truth as to who made us successful in the elections. It is clear from his speeches that he is no longer ready to face any threat from the Prime Minister or his followers. Because the reaction of the Prime Minister and his followers after the first protest rally in Gujranwala was very significant. Somewhere the rally was called a failure and somewhere a clear announcement was made to imprison the opposition leaders. But despite all these announcements, the opposition leaders did not back down. The allegations of the Prime Minister and his associates were fully answered in the power show held in Karachi. Conscious sections of the country are wondering what will be the outcome of this ongoing political tussle between the opposition and the government at a time when the world is facing economic losses and the losses of the Corona virus. The government is nothing more than a crackdown on corruption. It would be wrong to say that the PTI government has done anything important for education, health, police and farmers. It would be wrong to work for the welfare and reform of the people along with the corrupt elements. If changes had been made, the people would have stood behind the government today instead of attending opposition rallies and meetings. No matter how the PTI came to power, this is no longer a question. Because two years have passed since this party came to power. The people want to see the performance of this party which has been chanting the slogan of change. Slogans are being raised on this issue. There is no doubt that it is very important to eradicate corruption, but to abandon all other issues and declare war on corruption and there is no justice in it. does . Assuming that the former rulers were corrupt, they looted billions of rupees from the country, but is the method adopted by this government acceptable? What country in the world does not take action against corrupt rulers, but has this situation ever been seen in any other country? There is a lot to think about and to adopt the right strategy. The Corona-affected country cannot afford this political compromise. The people had hoped for good governance from the government but the promises were not fulfilled. Less than two years ago, reforms could have been introduced in many departments for which even a large budget was not required, but still nothing was done in practice, so the people are forced to look to the rulers of the past.