Plan to convert bricks into batteries 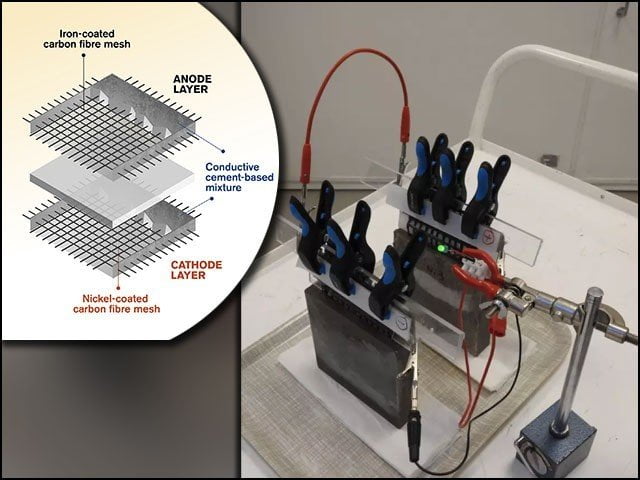 STOCKHOLM: Scientists at Chambers University of Technology, Sweden, are working on an untouched project to convert cement bricks into power-storage batteries.

For this purpose, when making bricks by mixing cement and gravel, a small amount of small carbon fibers (short carbon fibers) is added to them so that electricity can pass through the bricks while their strength is not affected.

At the same time, these bricks are made of carbon fiber, two types of meshes are also added. One of the lattice is covered with a layer of iron and acts as a battery anode, while the other lattice is coated with nickel metal which acts as a cathode.
Bricks made of small carbon fibers and the addition of a cathode / anode enable it to store (ie charge) electricity and also discharge (ie discharge) electricity when needed.

This seemingly simple and easy design is also the result of a long research in which the experts failed several times.

In their current state, these “brick batteries” can store electricity at a density of 7 watts per hour in each of their square meters. This energy density is still much lower than current commercial batteries but is ten times higher than similar concrete batteries in the past.

However, it is also important that thousands and millions of bricks are used together in the construction of a house or a flat. In that sense, the total storage capacity of all these bricks can be thousands of watt hours, which can turn an entire house into a huge battery.

These bricks can be charged using solar energy or wired electricity depending on the conditions and facilities.

In addition, similar bricks can be used for mobile communication towers and street lights in remote areas. We have a wide range of potential applications for concrete batteries.

This is a good development, of course, but the concrete / brick battery is currently a preliminary experiment that needs to be cleared of many defects in order to be usable in construction.

First of all, it is necessary to increase the density of electricity in these bricks, while on the other hand, the materials that convert the bricks into batteries should also be able to be charged / discharged for a long period of time.

Even if this is not possible, when the material in the bricks becomes unusable, it must be removed and replaced with new material, otherwise, like ordinary batteries, these bricks will be able to generate electricity only after a few months or a few years. Will not remain and the extra money spent on them will also be wasted.

In a report published in the Open Access Research Journal “Buildings”, the experts who invented the concrete battery said that they are working to eliminate the shortcomings of the current design.

He hopes to make better and more commercially usable concrete batteries in a few years.