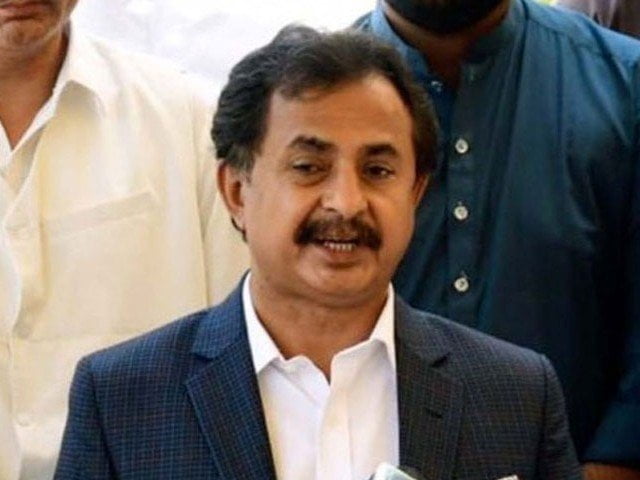 According to details, SSP Malir Irfan Bahadur reached the polling station No. 77 of Ghulam Hussain Goth on the orders of the Returning Officer during the by-election in Malir area of ​​Karachi. SSP Malir informed him of the ECP’s order and tried to take him away. The workers resisted and refused to leave the constituency, but after talks, police officials sent Haleem Adil Sheikh there.

Leader of Opposition in Sindh Assembly PTI Haleem Adil Sheikh was produced in Malir Police Anti-Terrorism Court under tight security. Police sought three days remand of the accused in six cases. The accused  handed over to  police on remand till Friday.
Arriving at the anti-terrorism court, Haleem Adil Sheikh said that he had already revealed that he would be attacked and that an attempt was being made to kill him like Murtaza Bhutto. Sindh Chief Minister Murad Ali Shah Tried to kill me, attacked us, fired on us, arrested us and FIR was lodged against us.

Haleem Adil Sheikh said that he has faith in Allah and everyone knows who fired. PPP considers Sindh as its father’s estate, we are the captain’s soldiers and we are not afraid of them.

It is to be noted that a case was registered against Haleem Adil Sheikh at Memon Goth police station in an official complaint yesterday. The case includes anti-terrorism, interference in government, rioting, aerial firing and other provisions. Three cases were also registered against three IK security guards Ramzan, Ghulam Mustafa Hafeez and Mahmood.