JEDDAH: Iran has replaced Afghanistan as the “home base” for Al-Qaeda terrorist leaders, US Secretary of State Mike Pompeo said on Tuesday.
Pompeo confirmed reports that Al-Qaeda second-in-command Abu Muhammad Al-Masri, who organized the bombings of two US embassies in Africa in 1998, had been shot dead in Tehran on Aug. 7 last year.
Al-Masri’s presence in Iran was evidence that “Al-Qaeda has a new home base. It is the Islamic Republic of Iran,” Pompeo said. “I would say Iran is indeed the new Afghanistan, as the key geographic hub for Al-Qaeda,but it’s actually worse. “Unlike in Afghanistan, when Al-Qaeda was hiding in the mountains, Al-Qaeda today is operating under the hard shell of the Iranian regime’s protection.” 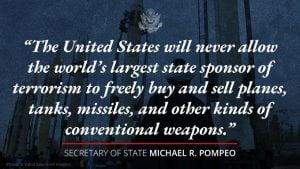 He called for more international pressure, and described the terrorists’ alliance with Iran as a “massive force for evil all over the world.”
Pompeo said he was imposing sanctions on Al-Qaeda leaders based in Iran and three leaders of Al-Qaeda Kurdish battalions.
He also offered a reward of up to $7 million for information leading to the location or identification of Iran-based Al-Qaeda leader Muhammad Abbatay, also known as Abd Al-Rahman Al-Maghrebi.