Prime Minister Imran Khan managed to get a vote of confidence 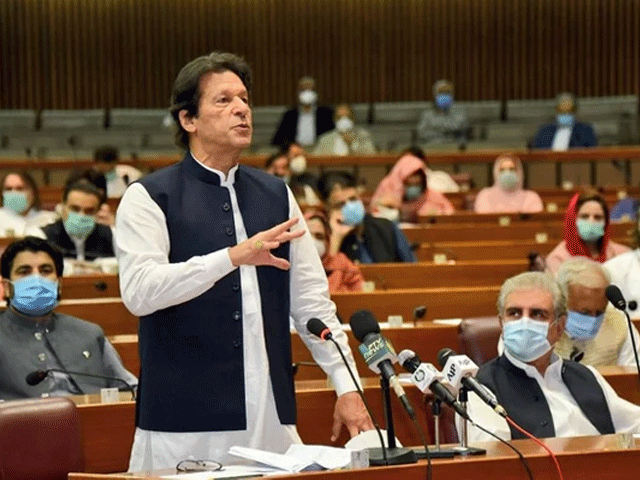 Prime Minister Imran Khan managed to get a vote of confidence from Parliament and he got 178 votes.

The most important meeting of the National Assembly was chaired by the Speaker of the National Assembly Asad Qaiser in which a vote of confidence for the Prime Minister was decided. More than 180 members, including Prime Minister Imran Khan, the government and allied parties MQM, GDA and PML-Q, attended the meeting.
Jamaat-e-Islami member Maulana Akbar Chitrali and PTM member Mohsin Dawar also attended the meeting, but the opposition parties’ coalition PDM boycotted the meeting and its members did not attend.

The meeting proceeded under a two-point agenda. After the recitation, Foreign Minister Shah Mehmood Qureshi presented a resolution of confidence in the Prime Minister, stating that it expresses confidence in Prime Minister Imran Khan in accordance with Article 71 (7) of the Constitution.

The House was divided for voting before the bells rang for 5 minutes. All the lobbies in the National Assembly Hall were locked after all the members came to the House.

The Speaker, who had given a vote of confidence to the Prime Minister, walked to the right of the National Assembly with the division number in the lobby. Not a single vote was cast in the no-confidence motion. Abdul Kabir Chitrali abstained from voting and walked out of the house when the bells rang.

Later, the Speaker of the National Assembly Asad Qaiser while announcing the result after counting said that when Imran Khan was elected Prime Minister he had got 176 votes but today he got 2 more votes and he got 178 votes. With the announcement of the result, the slogans of the Prime Minister’s House resounded. The result will now be sent to the President in writing and the meeting will be adjourned.

During the meeting, PTI members raised banners in the Parliament House with pictures of Nawaz Sharif and Asif Zardari with the slogan “Respect the Note”. Government members placed notes of honor on the opposition benches.