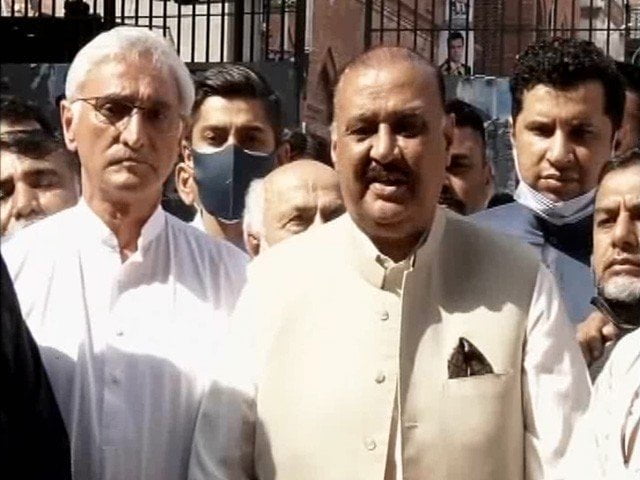 LAHORE: Pro-Jahangir Tareen members of the National and Provincial Assemblies have told the government that if justice is not done, we will be forced to move forward.

Speaking to media on the occasion of his appearance in the court along with Jahangir Tareen in Lahore, Raja Riaz said that we appeal to the Prime Minister for justice and seek justice from the Prime Minister under the umbrella of PTI. 40 members are demanding justice from Imran Khan. If we don’t get justice, we will be forced to move forward.

On this occasion, Ishaq Khakwani said that today there is neither justice nor honesty, we are not asking for any relief, nor are we blackmailing, give us a few days then we will bring everything to light and respond to the allegations.
It may be recalled that when Jahangir Tareen appeared in the Banking Court of Lahore, he was accompanied by 26 members of the National and Provincial Assemblies. Among them are Raja Riaz, Sami Gilani, Mubeen Alam, Khawaja Shiraz, Noman Langarial, Ajmal Cheema, Nazir Chauhan, Aslam Bharwana, Khurram Leghari, Umar Aftab Dahlon, Zawar Baloch, Nazir Baloch, Lala Tahir Randhawa, Abdul Hai Dasti, Faisal Jabwana, Rafaqat. Gilani, Amir Muhammad Khan, Aun Chaudhry and Imran Shah.