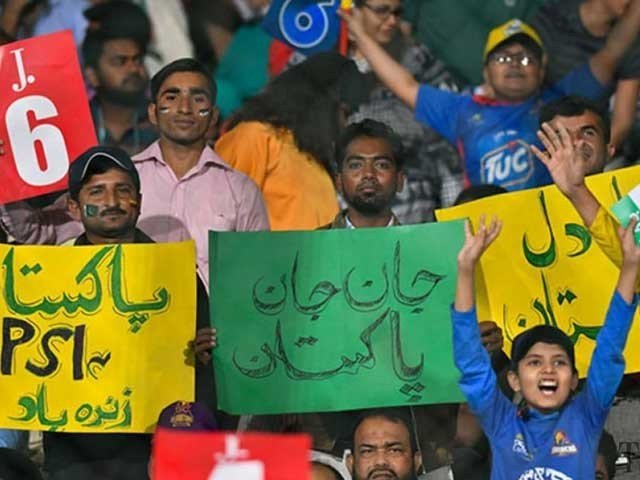 Lahore: A limited number of spectators were allowed to enter HBLPSL 2021.

According to the decision, a total of 7,500 spectators at the National Stadium in Karachi and a total of 5,500 spectators at the Gaddafi Stadium in Lahore will be able to sit in the stadium and enjoy live action. In the meantime, the two bodies, the NCOC and the Pakistan Cricket Board, will jointly review the situation, after which it will be decided whether to increase the number of spectators for the three play-off matches and the final.
In this regard, the Pakistan Cricket Board had given a detailed briefing to the NCOC, in which it was clarified that the organizers of the event and the PCB, the spectators sitting in the stands during the matches, the government coded 19 protocols and The social distance guidelines will be fully implemented. Now that the NCOC has allowed spectators to enter the stadium during the league, the PCB will announce its ticketing policy soon.

Pakistan Cricket Board chairman Ehsan Mani says he is grateful to the NCOC for relying on the PCB to allow fans to sit in the stadium and watch the match live. The PCB chairman said that the fans are the assets of the cricket board and even their limited number of stadiums will add four months to the event. He said that every fan is a stadium due to the limited number of entries. I can’t come but their limited presence is also a positive and correct decision.

He added that if he manages to hold the league successfully with a limited number of spectators arriving at the stands, he will see his case against the spectators in the home series against New Zealand, England and the West Indies this year as well