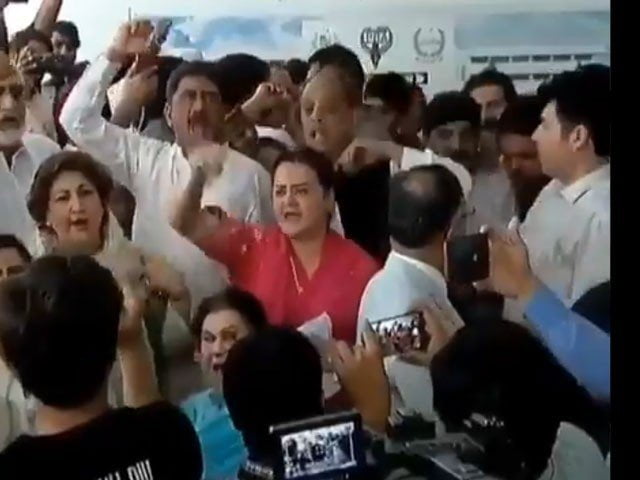 According to sources, a meeting  held in the National Assembly to give a vote of confidence to Prime Minister Imran Khan, which has been boycotted by the opposition parties, along with PML-N leaders Ahsan Iqbal, Maryam Aurangzeb and Musaddiq Malik Addressing a joint press conference, Shahid Khaqan Abbasi said that a meeting of the National Assembly was convened which is not only immoral and illegal, a notification was issued to convene a meeting in the dark of night. The President also expressed no confidence in the Prime Minister.

During the press conference of the league leaders, the PTI workers started rioting and started chanting slogans. PTI workers also carried placards and posters, but the situation became tense when PTI workers surrounded the PML-N leaders who were going to the Parliament House, during which there was a scuffle and the workers attacked Shahid Khaqan.

Abbasi was pushed while Musaddiq Malik’s collar was also grabbed in response, while PTI workers hit Ahsan Iqbal with a shoe.
On the other hand, the PML-N leaders also came and started a scuffle with the PTI workers.

Due to the tense situation, the police had to intervene and the police removed the PTI workers from the PML-N leaders. After which the League leaders held another press conference and the PTI leadership and the Prime Minister demanded an inquiry into the incident.

On the other hand, a large number of PTI workers have been gathering in D-Chowk since morning and the workers kept chanting slogans to go near the Parliament House. The workers said that the police had closed the D-Chowk gates. PTI workers also chanted slogans against Maulana Fazlur Rehman.