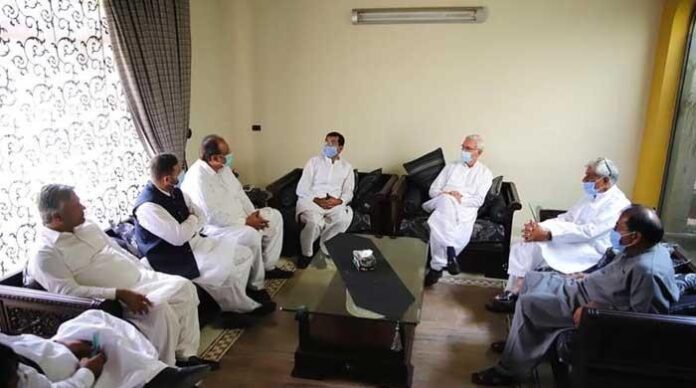 Several PTI lawmakers offered to quit the assemblies in support of party stalwart Jahangir Tareen, during a meeting held at his Lahore residence.

Sources privy to the meeting informed media that more than 30 members of both the national and provincial assemblies attended the huddle and discussed the roadmap ahead for the party, with a majority of them offering to resign.

According to the sources, the offer of resignations was not unanimously agreed upon by all lawmakers as a measure suited for the time being.

The lawmakers were, however, of the opinion that if “injustices” against Tareen continue, then the option of resignations from the assemblies must be exercised.

The sources said that the lawmakers also decided to contact others from the party.

They added that another meeting has been called on April 21 at the same venue to discuss Prime Minister Imran Khan’s silence over a letter sent by party members expressing dissatisfaction with the current state of affairs, as well as Tareen’s court summonings.

In the next meeting, it is expected that more PTI lawmakers will be in attendance, said the sources.

Today’s meeting follows one on April 9, when Tareen had invited lawmakers to dinner at his house.

The gathering had taken place the same day reports surfaced of 36 bank accounts belonging to the PTI stalwart, his son and his wife being frozen.

The move was made at the request of the Federal Investigation Agency, sources said.

The FIA has been tasked with probing the sugar crisis and is looking into the JDW Sugar Mills owned by Jahangir Tareen.