Regional alliance could fill void left by US withdrawal 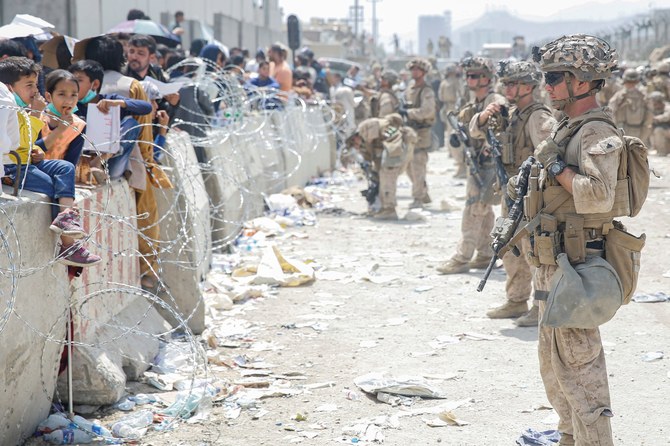 The US withdrawal from the Middle East has fulfilled a key objective of radical and terrorist forces and their backers. Al-Qaeda, Daesh and other terrorist groups have long been calling for the removal from the Arabian Peninsula of what they designate as “infidels.” Iran and its militias across the region have been trying to achieve the same objective. The so-called “axis of resistance” aims to expel Americans, and Westerners in general, from the region.
America’s exit from Afghanistan and the rise, once again, of the Taliban to power will strengthen the presence in the country of terrorist groups whose operations will not be limited to the region. They are likely to strike at US interests at home and abroad. This outcome could prompt Washington to reconsider its calculus — perhaps under a future Republican administration.
But one cannot assume that the US would easily be able to restore its control over the region. It would be hard for it to regain access to the deserted ports, bases and airports American forces left behind and to restore the confidence of regional partners in its role and leadership.
Meanwhile, regional insecurity will affect maritime navigation and the flow of energy to global markets, and the latter will hurt the US directly through a surge in oil prices, even if it has oil reserves. Already we see the Biden administration disgruntled at the rise in energy prices at a time when the US still has some level of presence in the region. So what would be the situation if the US pulled out of the region completely?
Maybe Washington will rely more on regional powers, especially Israel, Turkey and Egypt. Recently — and for specific purposes — it has relied on both Qatar and the UAE. In addition, Saudi-US relations will remain of special importance, given the Kingdom’s special status in the Islamic world and its critical role in the supply of oil.
In fact, taking into consideration all of the above, it is hard to measure the effect of Washington’s withdrawal from the region. It is likely that the pullout will lead to a power vacuum and encourage other world powers, such as China and Russia, to fill it with their clout and influence, or regional powers will step in and attempt to exercise their dominance.
Taking into consideration the 18th session of the Gulf Cooperation Council’s Joint Defense Council, which took place on Monday, the Gulf states should outline a comprehensive and cohesive strategy to fill a large part of the vacuum left by the US withdrawal from the region. This strategy must focus on several underpinnings, including: Unifying intra-Gulf efforts; establishing political, economic, strategic and military partnerships to face the challenges and threats; self-reliance; strengthening the strategic partnership between the Gulf states and EU members and other regions; and quelling — and rejecting — intra-Arab differences and combating terrorism and extremism.
In addition to the GCC bloc, there is a possible new, wider alliance that includes GCC countries, Egypt and Turkey, now that Ankara has shown signs of reducing its support for the Muslim Brotherhood. We have seen signs of this understanding, though it is too early to judge the outcome.
Pakistan, meanwhile, is hesitant about joining such alliances; Islamabad usually hints that it is dissatisfied with the growing relations between the Gulf states and India. But the region’s countries stand with Pakistan regarding the Kashmiri cause.
Saudi Arabia continues to provide financial support for Pakistan. As a result, Islamabad has found in Riyadh a friend to which it turns during the hardships it experiences. The Kingdom also hosts the biggest Pakistani community in the Gulf, which makes a significant contribution to the Pakistani economy — money sent from Saudi Arabia accounts for nearly 40 percent of Pakistan’s total remittances.
Therefore, there is a possibility that Islamabad might repay the favor and join this new emerging regional alliance.
Along with this alliance, European countries such as Germany, France and the UK could intervene to fill the void resulting from the US withdrawal — especially as most of these countries have significant historical links to the region. Moreover, there are significant investment and economic opportunities in the countries that would form the alliance, which could result in European countries being less in need of the Iranian market.

Saudi-US relations will remain of special importance, given the Kingdom’s special status in the Islamic world and its critical role in the supply of oil.

To conclude, the region has long played a vital role in global geopolitical changes and dynamics and has all the means and resources to play an influential role in the future at all levels.
But considering Washington’s invasions of Iraq and Afghanistan, its support of the so-called Arab Spring, the signing of the ill-fated Iran nuclear deal, and its contribution to the shifting balance of power in the region and the empowerment, directly or indirectly, of non-state actors, the US has to fix the problems it has created before it completely withdraws. (Courtesy Arab NEWS)