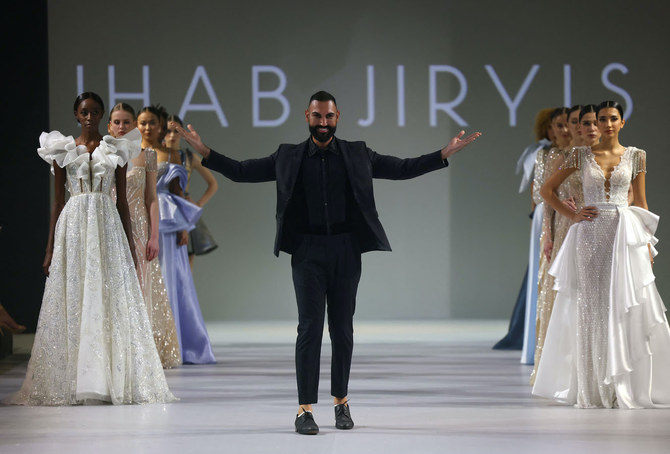 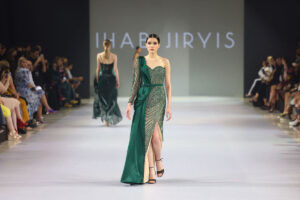 “Ever since I was a child, I remember dreaming about being a fashion designer. The colors, the fabrics, the cuts, the shapes … this is my game in life. This is how I can express everything I am feeling or thinking,” the Palestinian evening wear and bridal gown designer told Arab News earlier this year. His Spring/Summer 2022 collection bore out his words, dazzling the audience with asymmetrical designs, glamorous silhouettes, subtle high-end embroidery, seductive maxi dresses, and sequins galore.

“The tough times or the scarcity that we live in creates bigger challenges for us,” he said of working in Palestine. “It makes us, as designers, create more and express ourselves in artistic ways through which we can communicate with the world.”

Jiryis launched his eponymous label 12 years ago, but this was his first physical show (having appeared in last year’s digital-only event). It was a triumph. And it suggested it’s just a matter of time before his stated goal of ‘going global’ is realized. 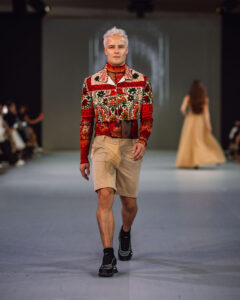 Beirut-based designer Eric Ritter explained the thinking behind his label’s name to Arab News in May this year. “We decided to call it Emergency Room because we were going to truly do things a way that is environmentally friendly, ethical, and respectful of the environment,” he said. Doing things differently is at the core of Ritter’s design philosophy, and informed much of the presentation of his “Neverland” collection at Arab Fashion Week. In the event’s most dramatic show, as the models (a group of clients, friends and fans) walked, there was no soundtrack save for Ritter’s own voiceover discussing the inspiration behind his striking upcycled collection, which he also explains on the brand’s website: “Through the collection, we aim to capture, process and catalyze the essence and energy of any conversation happening in Beirut at the moment, the socio-economic crisis, the truly slow post-pandemic remission, and most importantly, the deafening ‘Should-I-Stay-Or-Should- I-Go’ inhabiting the minds of every Lebanese today, young or old,” he writes. “(We) started as a brand centered around a community, harnessing the latter’s highs and lows, and working towards a better tomorrow. ‘Neverland’ is the natural continuation — a response to a severe situation, a cry of frustration, but also resistance. Resistance through process, resistance through work, resistance through art, resistance through standing ground.” 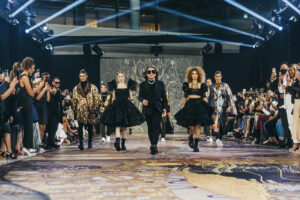 The Dubai-based designer’s catwalk show was as meticulously crafted and artfully designed as you’d expect for a collection called “Impalpable Dream of Gustav Klimt.” Klimt’s artwork graced the runway, but perhaps the most eye-catching part of Cinco’s show was the model lineup — spectacularly diverse and inclusive, featuring models with prosthetic limbs, models of various ethnicities, and plus-sized models showcasing Cinco’s couture collection.

The clothes themselves lived up to the high-concept presentation: Flamboyant dresses with immaculate detailing, dazzling beadwork, and glittering suits and gowns. It was a fitting climax to the week, and received a well-deserved standing ovation from the packed house. 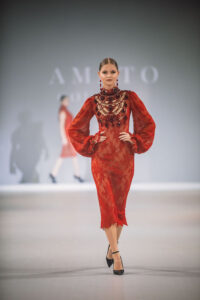 The Dubai-based label produced a typically dramatic collection for Spring/Summer 2022, dominated by a color palette of reds and blacks and featuring sweeping evening gowns and tailored body suits, all presented with the handcrafted flair that is the signature of Amato’s Filipino creative director Furne One. 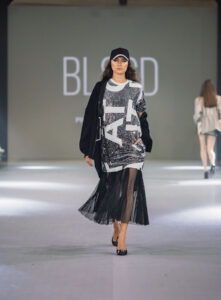 The Dubai-based Iraqi designer’s show kicked off Arab Fashion Week’s final day. Zaki herself was in Costa Rica at the time, but appeared via video link to introduce her Spring/Summer 2022 collection, consisting of elegant evening gowns characterized by, the organizers said in a press release, “pastel colors, simple cuts and ruffled silhouettes.” Once again, sequins proved popular in a lineup that was both regionally appropriate and internationally appealing. 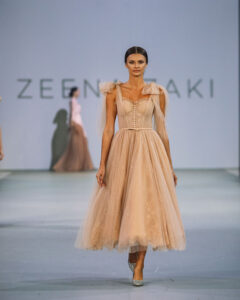 The Dubai-based Lebanese label showed a relaxed, ready-to-wear collection tailored for the mass market. Jacket-and-maxi-skirt combos mixed with oversized outfits in a palette dominated by white, black and metallic silver. The brand was definitely on-trend with its asymmetrical silhouettes too. 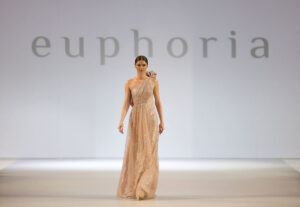 The Emirati label hasn’t been around long, but it’s made a big splash on the regional scene — landing deals with major department stores and online vendors. The label’s collection, showcased at October’s event, combined the sophistication of red-carpet evening wear with the ease and comfort of ready-to-wear couture in a range of pastel colors — often spruced up with sequins.