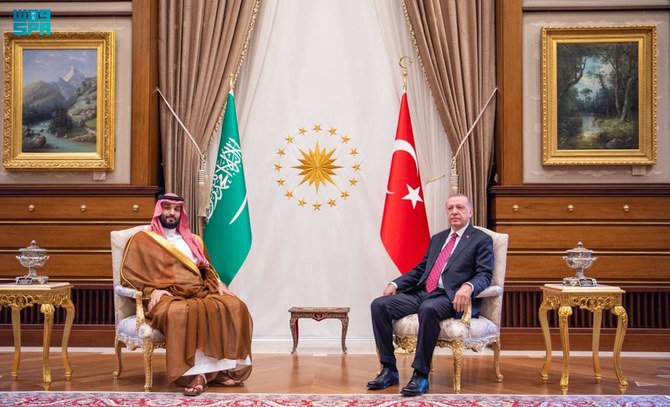 The long-awaited visit of Crown Prince Mohammed bin Salman to Turkey on Wednesday was part of his first tour outside of the Gulf since the outbreak of the COVID-19 pandemic. He also had stops in Egypt and Jordan — two countries that are set to participate in the Jeddah summit next month.

The crown prince’s visit to Turkey reciprocates President Recep Tayyip Erdogan’s fence-mending trip to Saudi Arabia in April, which was the first high-level visit in years and followed intense efforts to repair their tense relations. In Erdogan’s words, the visit was “a manifestation of a common will to start a new era of cooperation between two brotherly countries.”

Erdogan officially welcomed the crown prince at the presidential complex, with this reception followed by one-on-one and delegation-level meetings. They discussed ways to take their bilateral relations to a much higher level.

As a researcher following Turkish-Saudi relations closely, I often describe the complex ties between two of the heavyweights in the region with the metaphor of a roller coaster. Relations between Ankara and Riyadh have seen numerous ups and downs, particularly over the past two decades. In regards to the nature of their relationship, I use the term “occasional partners.”

A close examination of Saudi-Turkish relations shows that a combination of regional and international factors push the two countries toward cooperation when it comes to developments regarding the balance of power in the region. We saw this in the early 2000s, when the developments were mostly about power distribution, and both Turkey and Saudi Arabia approached each other positively, keeping aside their domestic considerations. They were able to manage their differences through different tools of dialogue. However, when the driver of regional developments was mostly ideological or personal in nature, we saw domestic factors restrain their relationship. The case of the post-2010 developments in the Middle East was the best example in this regard.

In geopolitical terms, the limitations preventing a solid strategic and institutionalized relationship between Turkey and Saudi Arabia visibly emerged in the last decade. However, now that most of the issues that led to tensions between Ankara and Riyadh have partially vanished as the two countries move toward a new era in their bilateral ties, there is a need to move beyond the personalized nature of their relationship and institutionalize it for long-term mutual benefits. For this, the two countries need to come up with a cooperative road map that can help them address their differences in foreign policy. A solid and institutionalized road map would be more likely to stand firm against future challenges in their relations.

Relations between Ankara and Riyadh have seen numerous ups and downs, particularly over the past two decades

Economic tools, cooperation in the realm of security and, most importantly, public diplomacy could be key components in consolidating Saudi-Turkish relations. Cooperation in the social, cultural and media dimensions are also crucial to enhancing the rapprochement process and would bring long-term benefits for both sides. I hope Wednesday’s meetings will pave the way for such a long-term, institutional relationship between two important countries in the region.

Erdogan’s statement that affirmed Turkey’s backing of Saudi Arabia’s bid to host the 2030 World Expo in Riyadh was important in this regard, indicating that the two countries seem to be extending their partnership beyond the economic sphere and into the cultural and social spheres.

Although the economic factors in this rapprochement are given much attention, geopolitical and regional security conditions are more likely to be driving forces. These two countries’ interest in the security and stability of the region in general and the Gulf in particular is a common ground that can be developed on a win-win basis. If Turkey and Saudi Arabia succeed in developing realistic understandings and expectations of each other, this will pave the way for the mutual trust needed for further cooperation.

Meanwhile, the crown prince’s regional tour came ahead of US President Joe Biden’s visit to Saudi Arabia next month, during which he will aim to mend ties with the Kingdom amid the oil crisis due to the Russo-Ukrainian war. The policies of the US occupy a unique position in Turkish-Saudi relations. Both Turkey and Saudi Arabia no longer trust their Western allies, which have failed to protect their partners in Afghanistan and Ukraine.

The countries of the Middle East are facing serious energy and food crises, along with their internal economic problems due to both the post-COVID-19 situation and the war in Ukraine. These crises have made the other contentious issues between the region’s countries insignificant. We are in a period now where domestic considerations are given more weight than foreign policy issues.

Over the past year, Ankara has embarked on a diplomatic push to reset relations with regional powers such as Israel, Egypt and the UAE, giving way to a period of greater pragmatism in Middle Eastern relations. Thus, the improving ties between Ankara and Riyadh are likely to focus on maintaining mutual interests. The two countries have complementary economies, as one specializes in the energy sector while the other focuses on the defense industry and food production.(Courtsy Arab News)