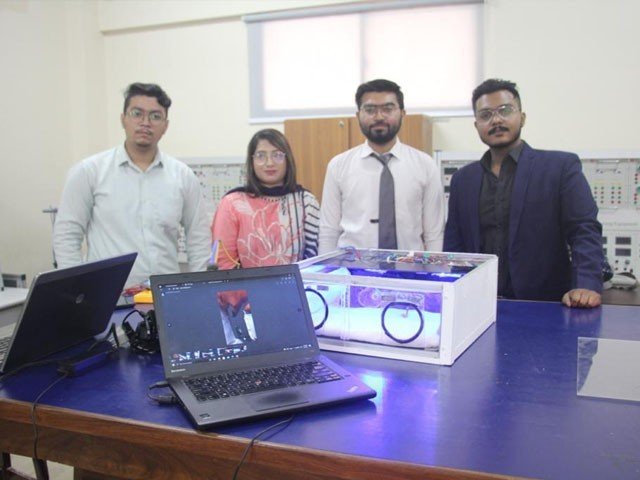 KARACHI: Students of Shar-e-Quaid have developed a cheap and modern incubator, which will be developed on a commercial basis to significantly reduce the infant mortality rate in Pakistan.
This prototype incubator is easy to move from one place to another, and the mobile application Neox Care allows real-time monitoring of the baby in the incubator as well as monitoring and control via mobile phone. This feat has been performed by the students of Electrical Department of Usman Institute of Technology. A four-member team of students comprising Syed Fatima Ejaz, Mohammad Ahsan Raza, Mirza Sameer Ahmed and Aziz Zakir under the supervision of their teachers Engineer Sana Sohail and Engineer Atif Farid have developed this portable incubator equipped with modern features which is low cost and unique features. Is an important development in the field of child care in Pakistan.

“Our team decided to replace the expensive incubators with modern and low cost incubators to reduce the infant mortality rate,” said Syeda Fatima Ijaz, leader of the team that developed the cheap and portable incubator. It has been designed keeping in view the difficulties of remote and backward areas which can be developed on a commercial basis at a cost of Rs. 25,000 to 30,000.

According to Fatima Ijaz, the biggest advantage of this incubator is that it is portable at low cost, meaning that it can be easily transported from one place to another by placing it in a car, rickshaw or taxi, while ordinary incubators In the competition, the students’ incubator is equipped with light-powered ultraviolet lights that will be useful in treating children with congenital jaundice.

The mobile application will have a complete record of the children in the incubator, as well as the ability to monitor and control multiple incubators at the same time, making it easier for staff and doctors to care for children, in case of an emergency or parameters. The application will also issue an emergency alert in the event of an unusual change so that an emergency can be dealt with immediately.

Fatima Ejaz says that quality testing has been done with the help and consultation of medical experts to check the health parameters of the incubator, which has yielded very good results. We also compared this incubator with the incubators in the hospitals, which was quite accurate. The whole process involved the consultation of medical experts who appreciated the features of this incubator and described the results as excellent.

Fatima Ijaz said that the test model of the incubator was in the first phase, in the second phase it will be made more portable, however for the second phase the Research and Development (R&D) fund is the first priority. In this phase, the incubator will be equipped with battery backup which will provide 20 to 25 hours backup and in areas where load shedding rate is high, there is no danger to the life of the child kept in the incubator even during power outage. Will be.

It should be noted that incubators used in hospitals cost at least Rs 3 to 9 lakh, as they are expensive and difficult to move from one place to another. Due to these two basic challenges, this facility is not available in hospitals in remote areas of the country, while high infant mortality rate in Pakistan is also recorded in backward and remote areas where there are no treatment facilities. The infant mortality rate has been steadily rising since.